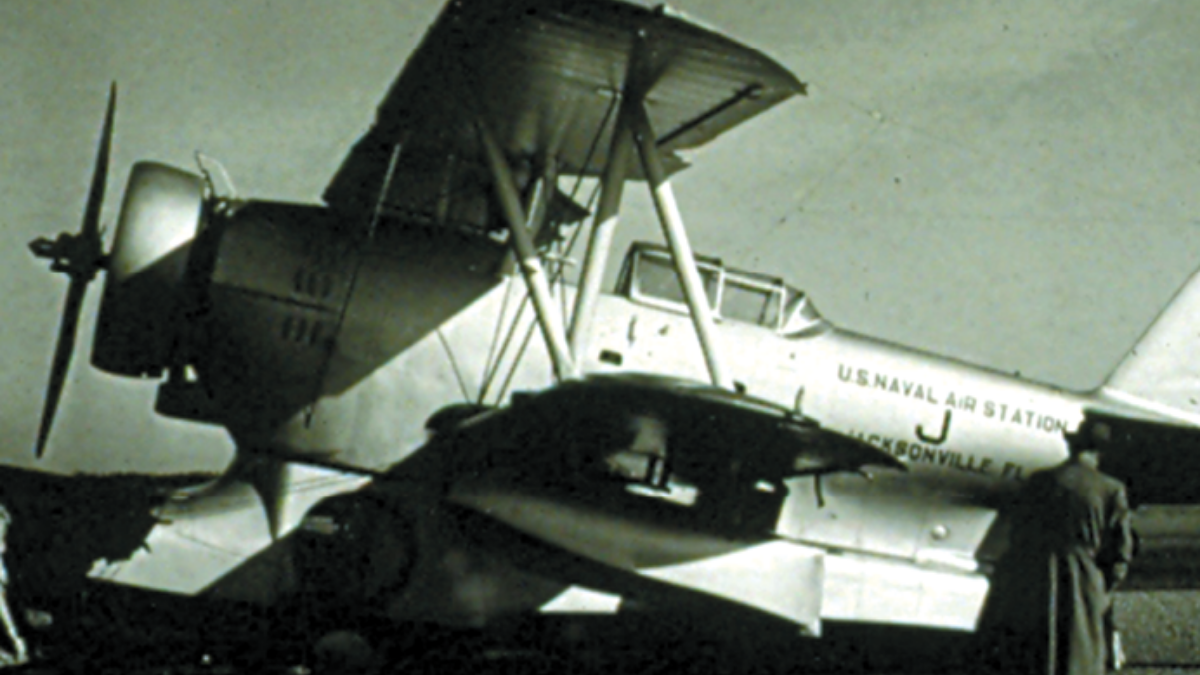 The site that Naval Air Station Jacksonville occupies today was first used by the U.S. Army in May 1907, and then by the Florida National Guard. After many sites were investigated, a 13,000-acre tract of land at Black Point was recommended as the site for a state camp.

On March 22, 1939, The “Hepburn Board,” named after its principle, the Commander in Chief of the U.S. Fleet Adm. Arthur Japy Hepburn, was charged with the review of the U.S. defense capabilities. The Hepburn Board Report served as the basis for the massive U.S. defense expansion of the late 1930s and the recommendation of the establishment of NAS Jacksonville at the Camp Clifford R. Foster site. 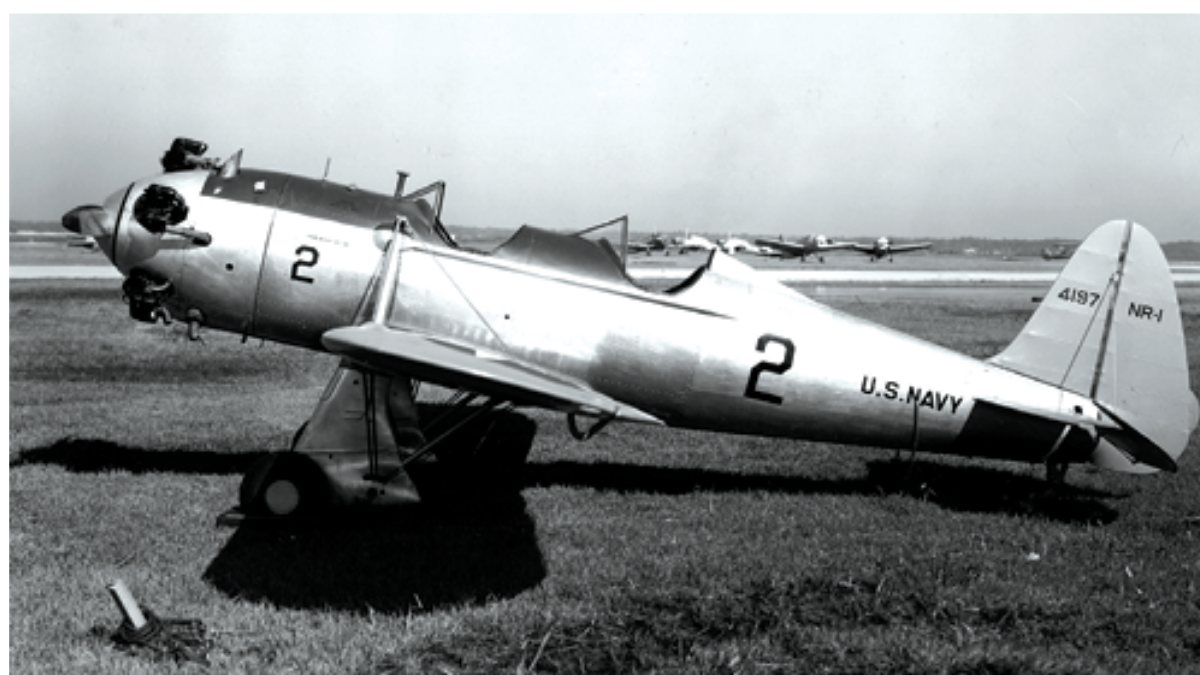 Aug. 15, 1941: First major aircraft overhaul completed at the Assembly and Repair (A&R) shops with completion of N2S Stearman No. 3423.

May 24, 1942: Station flies 254 aircraft at one time as a demonstration of air power for visiting Pan-American officials.

March 10, 1944: Two SNB twin-engine aircraft are assigned and the multi-engine phase of instruction is inaugurated.

Aug. 31, 1945: Navy Separation Center Commissioning Ceremony is held. Thousands of Sailors would be discharged from the Navy before the center was closed.

April 18, 1946: Lt. Cmdr. Roy “Butch” Voris on orders from Adm. Chester W. Nimitz, the Chief of Naval Operations, organizes the formation of a flight demonstration team to keep the public interested in Naval aviation. The Blue Angels perform their first flight demonstration less than a year later in June 1946 at their home base, NAS Jacksonville, flying the Grumman F6F Hellcat. Only two months later on Aug. 25, 1946, the Blue Angels transition to the Grumman F8F Bearcat and introduced the famous diamond formation.

Oct. 21, 1948: Ensign Jessie Brown becomes first African-American in Navy to receive his “Wings of Gold” in ceremony at NAS Jacksonville. 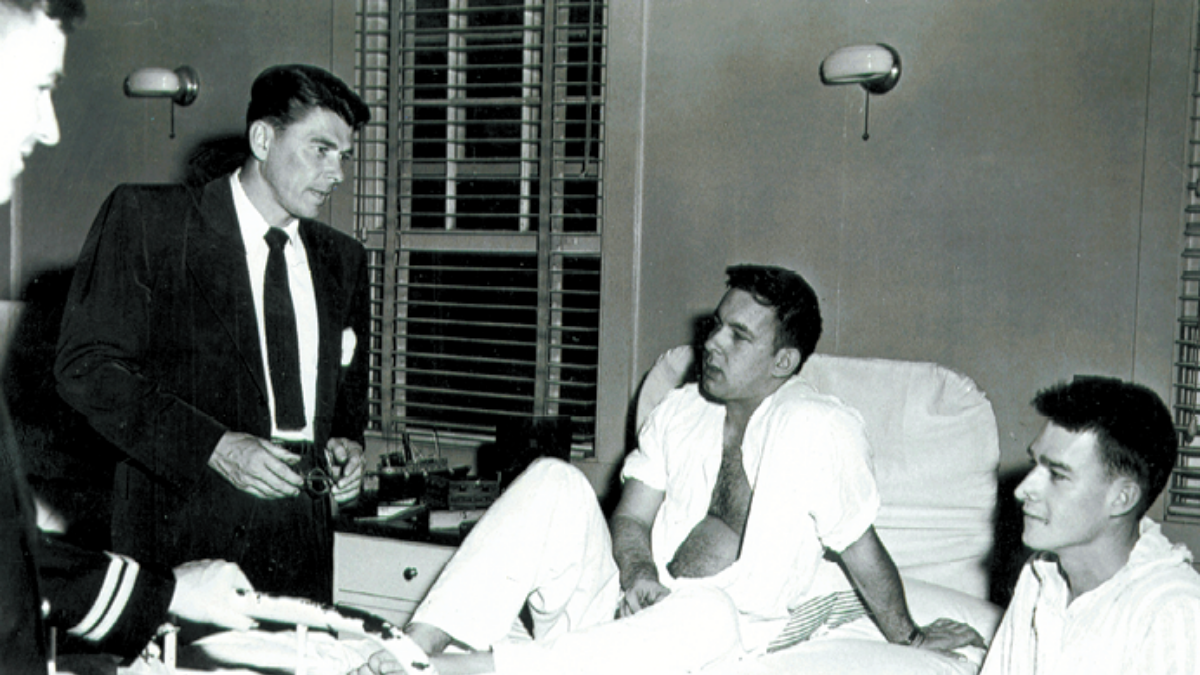 April 9, 1951: Carrier Air Group 8, composed of Reserve Squadron VF-742 and others, is re-established at NAS Jacksonville. FASRon 795 reports to NAS Jacksonville for training with FASRon-109.

October 1952: A jet ejection trainer, one of the first built, is installed at NAS Jacksonville. Reserve patrol squadron VP-742 is established.

Feb. 16, 1954: The Navy’s only Landing Signal Officer School is established at NAS Jacksonville.

Nov. 1, 1955: Patrol squadron VP-3 is disestablished. Heavy Attack Squadron One “Tigers” (VAH-1), the first of its kind, is established at NAS Jacksonville.

November 1956: The first airplane to land at the South Pole is one of four modified by NAS O&R Department. Reserve squadron VP-742 is re-established. 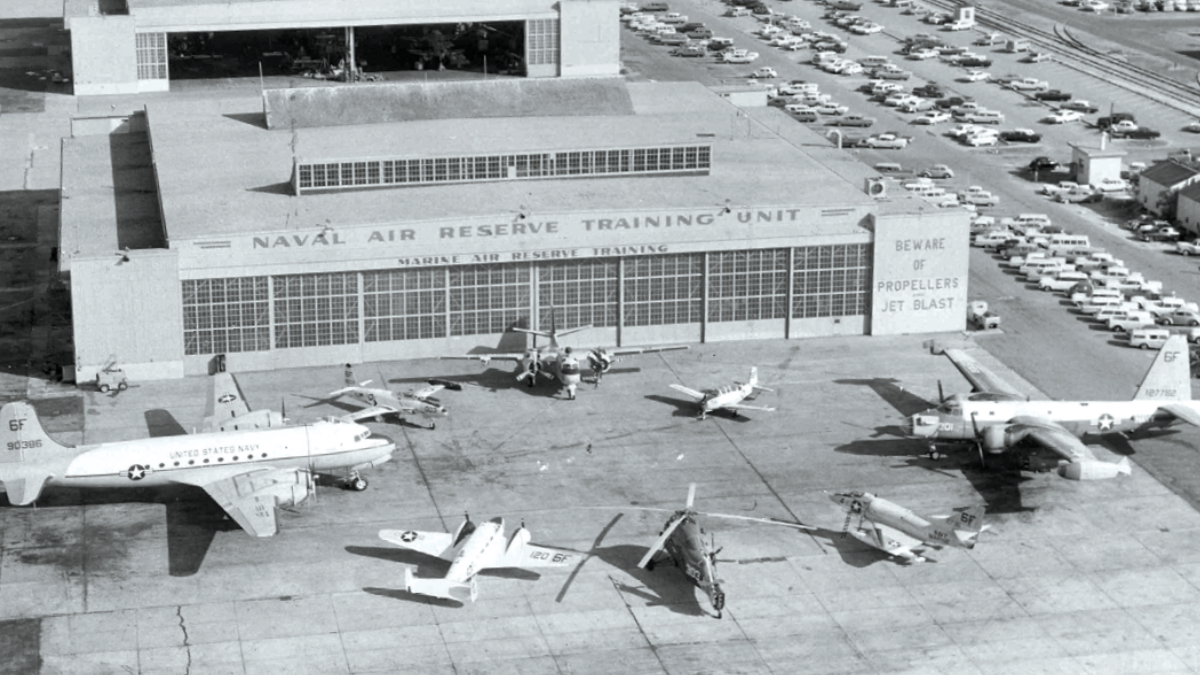 Oct. 1, 1963: A detachment of VP-45 arrives. Homeport of VP-5 changes from NAS Bermuda to NAS Jacksonville.

May 16, 1965: CPO Club building (corner of Yorktown/McFarland) is destroyed by fire.

April 25, 1968: The Douglas A-1H Skyraider of VA-176 is phased out in ceremonies at NAS Jacksonville. This was the Navy’s last piston-engine carrier-based attack squadron and the last to operate the A-1 “SPAD.” NAS Jacksonville-based VA-176 is moved to NAS Oceana. 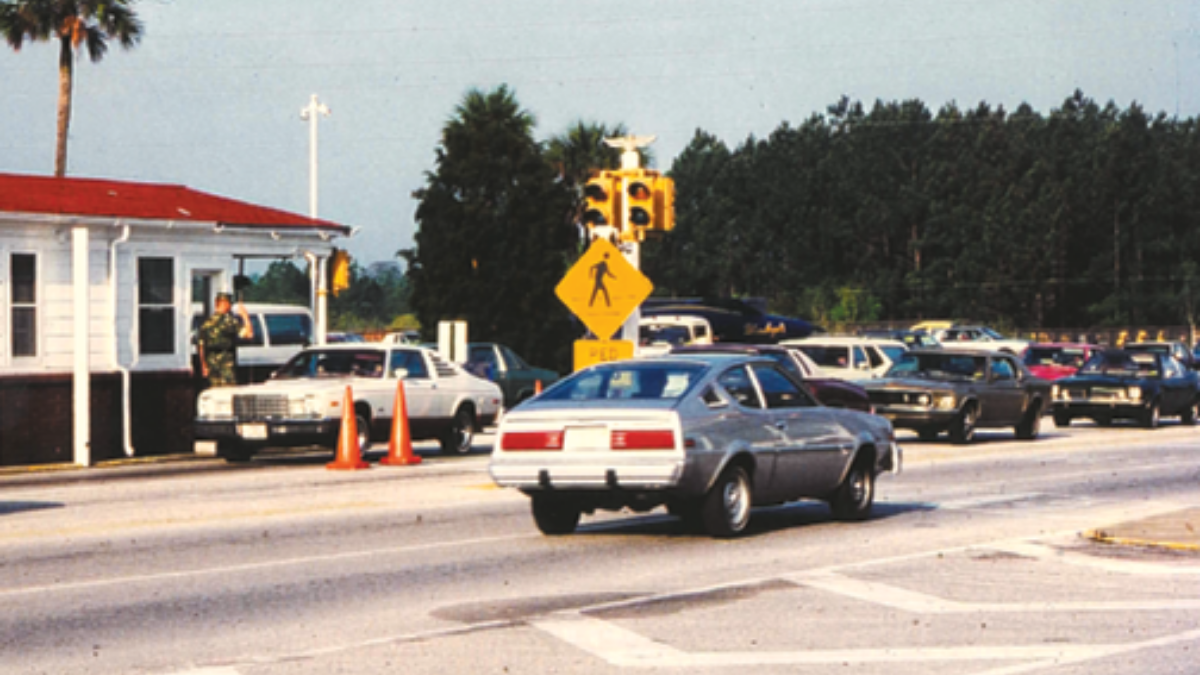 Feb. 21, 1974: With the graduation of Aviation Electrician’s Mate Class No. 411, the U.S. Naval Air Technical Training Center at NAS Jacksonville is transferred to NAS Memphis, Tennessee. 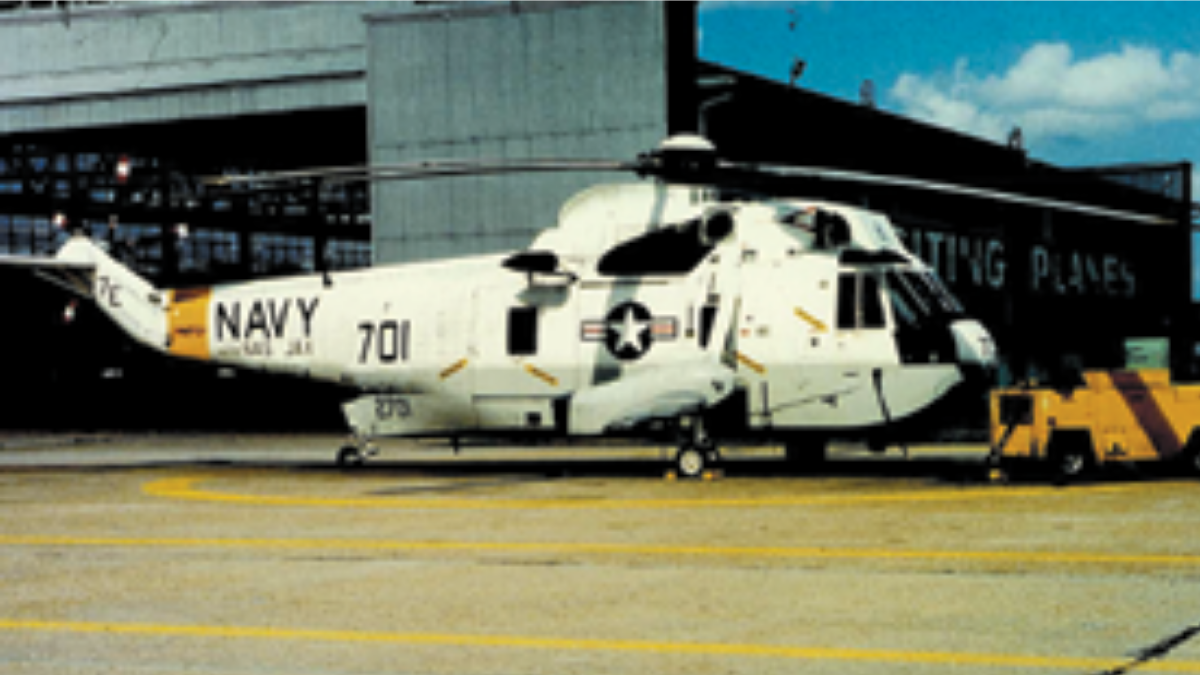 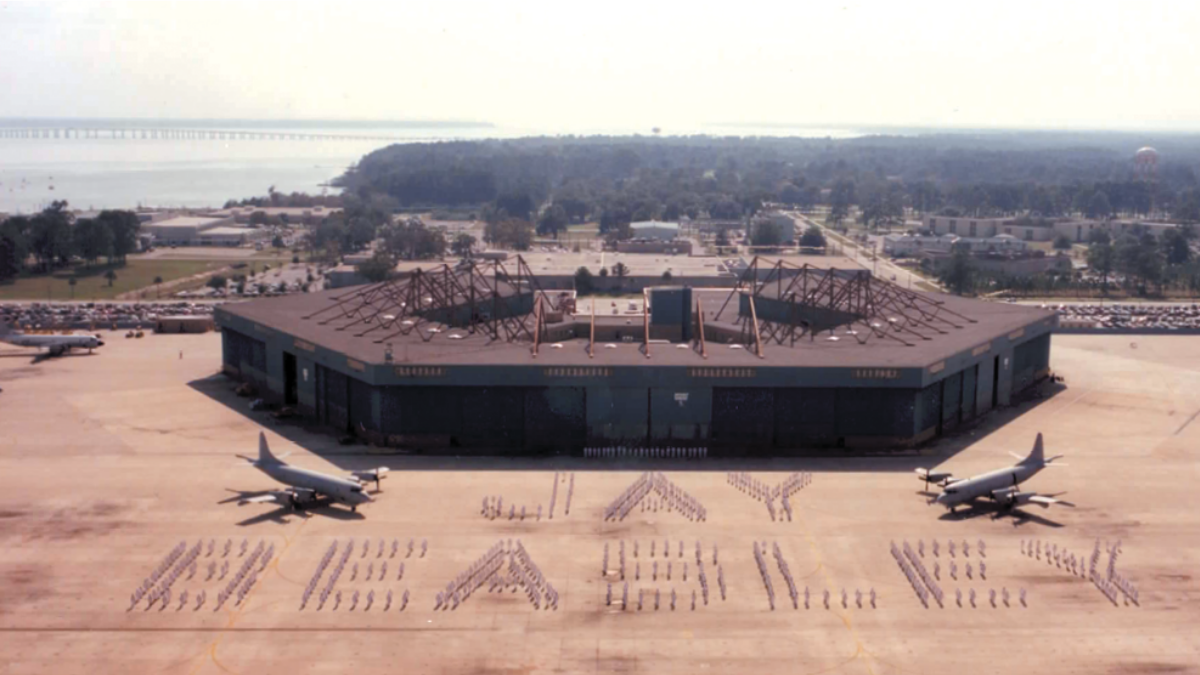 May 24, 1991: NAS Jacksonville is presented Commander Installation Excellence Award for Best Base in the Navy in ceremonies at the Pentagon.

May 21, 1993: Lt. Cmdr. Kathryn P. Hire is the first woman assigned to a Navy combat aircraft. She is assigned to Patrol Squadron VP-62 at NAS Jacksonville. 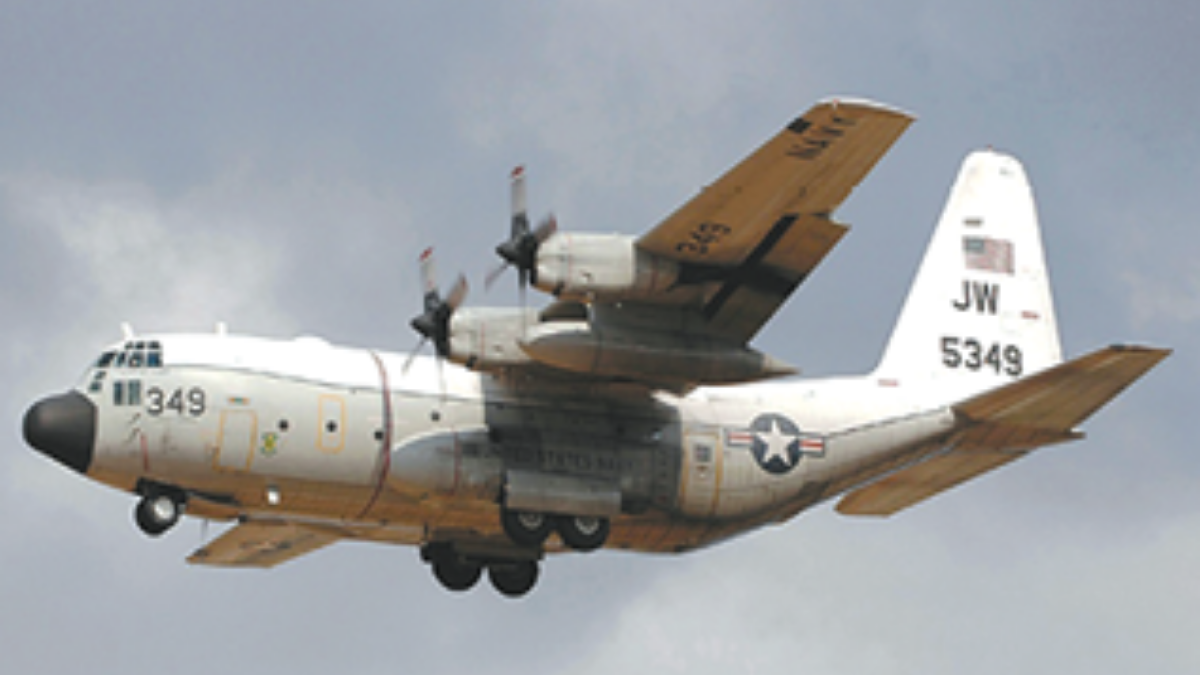 Nov. 2, 2000: The NAS Jacksonville Air Terminal Building 278 is dedicated in the name of retired Navy Capt. Roy M. “Butch” Voris, founder and first flight leader of the Blue Angels aboard NAS Jacksonville in 1946. This was the first Navy building named after a Blue Angel.

May 5, 2009: Ribbon-cutting ceremony for the new VP Hangar 511 is held. The $123.5 million hangar will be occupied by patrol squadrons relocating from NAS Brunswick, Maine. 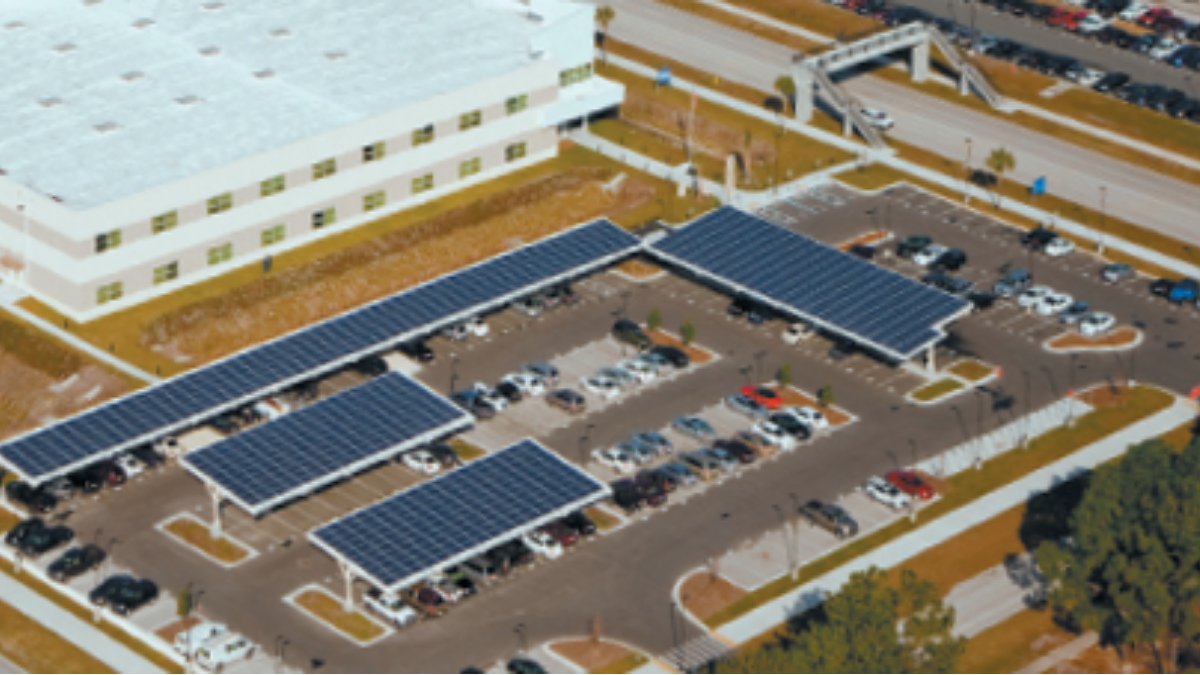 June 7, 2010: Last P-3C Orion aircraft of VP-26 arrives. This is the last squadron to relocate from NAS Brunswick, Maine, to NAS Jacksonville.

March 28, 2012: P-8A Poseidon Roll Out Ceremony is held at VP-30 Hangar. Also, a ribbon-cutting ceremony for the P-8A Integrated Training Center, Building 512 is held. More than 2,400 guests attend the ceremonies.

Feb. 4, 2015: Fleet Readiness Center Southeast ends the J52 Engine Repair Program. Since the first engine was overhauled in 1965, more than 7,500 engines had been repaired.

Feb. 12, 2015: NAS Jax holds a groundbreaking ceremony for a new commissary, complete remodeling of the Navy Exchange store and upgrade to the Naval Hospital Jacksonville Satellite Pharmacy. The new commissary is set to open in 2017.

Oct. 15, 2015: NAS Jacksonville holds a Zero Discharge ribbon-cutting ceremony for its wastewater reuse expansion project. NAS Jax becomes the first major utility in Northeast Florida to achieve zero discharge of its treated wastewater to the St. Johns River. Additionally, reuse of treated wastewater has eliminated the withdrawal of 73 million gallons of groundwater from the Florida Aquifer every year — saving $200,000 in annual fees for potable water, while reducing the use of fertilizer. The reuse water is being used for irrigation on the station and neighboring Timuquana Country Club golf course.

Oct. 15, 2015: NAS Jax celebrates its 75th anniversary as the first naval air base in Northeast Florida in front of a crowd of 500. A time capsule dedication is held, during which tenant commands deposit historical items to be opened on Oct. 15, 2075. Mayor Curry presents a proclamation citing Oct. 15 as NAS Jacksonville Day in the city of Jacksonville.

June 27, 2016: After being closed for a year, NAS Jacksonville runway reopens with a P-8A Poseidon touching down on the newly refinished runway. This was the most substantial renovation the runway had received since its opening.

October 2016: VUP-19 is commissioned and holds an assumption of command ceremony.