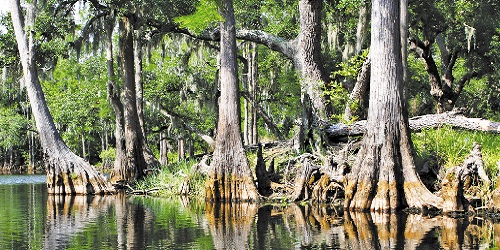 About a five-hour drive up Overseas Highway 1 from Key West, the Everglades National Park encompasses more than 1.5 million acres of diverse ecological preserves and is the only subtropical wilderness area in the United States. A co-mingling of both fresh and saltwater, the Everglades Ecosystem is resplendent with rare and endangered species and offers numerous opportunities for exploring. Camping, hunting, fishing, canoeing, kayaking, hiking, biking, boating, swimming, diving and snorkeling are just some of the ways one can experience the multivariate natural wonders of this designated World Heritage site.

Once covered by an ancient sea, the Everglades are now home to much of the remaining wildlife in South Florida. With a blend of temperate and tropical climates, the Everglades display a menagerie of plant and animal species that coexist nowhere else on the planet. This includes more than 360 documented species of birds, 300 species of fish, 40 species of mammals and 1,000 species of plants. Unfortunately, some of the most famous creatures in the Everglades are also threatened or endangered. These include the leatherback turtle, West Indian manatee and Florida panther.

Best visited during the dry winter months of January through April — when free from summer’s oppressive heat, 90 percent humidity, rampant mosquitoes and potential hurricanes — the region reveals a vast spectrum of ecosystems. Some of the distinct habitats include mangrove stands, pine rocklands, hardwood hammocks, cypress swamps, freshwater sloughs, marine estuaries and the famous sawgrass marshes. Additionally, the porous limestone foundation beneath the Everglades serves as an aquifer, filtering and capturing fresh water as a source for the remainder of the state.

The Everglades National Park is home to the largest contiguous stand of salt-tolerant mangroves anywhere in the U.S. Found along the coastal tides where fresh water meets salt, one can canoe under their canopies, watching wading birds feed and nest. These stilt-rooted mangroves are also Florida’s first line of defense against hurricanes. With a backcountry camping permit, one can chart a course through the 99-mile Wilderness Waterway route between Flamingo and Everglade City. The excursion can take as little as six hours by motorboat or up to seven days via canoe.

The Pineland, or “pine rocklands” is a region of slash pines whose roots take hold in the limestone and produce a vast canopy under which an incredible plethora of flora thrive. Fire has always been an important component of this region, serving to oust the faster-growing hardwoods before they can block the sun from pine seedlings. Normally, natural causes like lightning served to spark the forests, but nowadays rangers use controlled burns to keep the pinelands healthy.

What once was the “river of grass” — a vast, sheet-like, slow-flowing (100 feet per day), freshwater river region, measuring 60 miles wide and 100 miles long, from Lake Okeechobee to Florida Bay — is now 25 percent of its former size. Seventeen hundred miles of canals and deepened rivers, constructed in the mid-20th century to stymie the flood burden of the Southern state, actually led to an accelerated deterioration of the once fertile wetlands. While trying to make conditions more hospitable to human life, the drainage efforts inflicted a double detriment to the natural realm — losing more than a billion gallons of fresh water a day to the sea, the prairies and marshes, with their indigent supporting biosphere, subsequently dried out, were consumed in fires and lost forever. The Everglades National Park system was founded with the mission of conserving the precious remnants of this once bounteous wild.

Spanning 720,000 acres of freshwater swamp, the Big Cypress National Preserve is also the best place for spotting some of Florida’s most famous creatures such as the American alligator and the endangered Florida panther. The cypress was known as “the wood eternal” because of the element-resistant qualities it develops as a result of being grown in standing water. While not actually harboring any individual big cypress trees, the area was instead named for its vast expanse of cypress trees — hundreds of thousands of acres — lining the estuaries. Today, visitors enjoy camping, fishing, hunting and boating here. Unlike most preserves that are ecological sanctuaries for their flora and fauna, the Big Cypress region makes allowances for off-road vehicle use like airboats, swamp buggies and all-terrain vehicles.

Furthermore, with the aim of maintaining the ecosystem’s integrity in perpetuity, Big Cypress National Preserve also permits hunting. As part of a long-standing tradition in the region, hunters pursue white-tailed deer, turkey and hogs with separate seasons for archery, muzzle­loaders and general guns. However, the hunting of alligators is not permitted. Viewing platforms are provided to witness the large groups of gators congregating from January through May, though all are advised to respect the large reptiles by not feeding them and by keeping a safe distance.

Seventy miles west of Key West and accessible only by boat or plane, Dry Tortugas National Park is a striking example of beauty. First discovered by Ponce de Leon in 1513, the seven-island chain of sand and coral shoals once teemed with giant sea turtles (tortugas) yet lacked any freshwater source, hence: dry. The military commissioned the construction of 450-cannon Fort Jefferson — strategically located in the Florida Straits — in 1846 but, due to the advent of the rifled cannon, the fort was obsolete before it was completed. The region is also part of a 46-square-mile preserve called the Research Natural Area. This no-take, no-anchor preserve ensures that endangered game fish have a sanctuary from detrimental commercial overfishing and that the island’s deteriorating coral reefs have an undisturbed refuge for scientific research. Park visitors can enjoy fishing, boating, swimming, snorkeling and scuba diving in the pristine subtropical coral community, regarded as one of the most well-preserved marine areas in the Florida Keys.

Founded in 1982 as an airboat ride attraction, Everglades Alligator Farm expanded into commercial alligator farming after state approval in 1985 as a means to preserve the
then-endangered American alligator. Everglades Alligator Farm features more than 2,000 gators at different stages of development exhibited in various grow-out pens and breeding ponds. Feedings and wrangling demonstrations take place daily, and the farm still features exciting airboat rides through the grassy wetlands to observe the reptiles in their natural habitat. In addition to gators, the park is also home to caimans, crocodiles and other reptiles. Happily, since the legalization of alligator farming undercut the necessity for poaching, the gator population has risen back to 1.5 million. The park is open 9 a.m. to 5:30 p.m. daily, and admission is $27 for adults ($19.50 for children), which includes an airboat ride, farm access and shows.

Just off Highway 1 in south Dade County and a little more than three hours from Key West, Monkey Jungle is a genuine wilderness ecosystem that is home to nearly 400 primates comprising 30 species. Founded by naturalist Joe DuMond on an expansive 30-acre hardwood hammock, or raised hill, the Monkey Jungle assists in the conservation of endangered apes while allowing visitors to experience the uncaged primates in their wild natural habitat. The primate population includes Java macaques, orangutans, gorillas, gibbons, howler monkeys, squirrel monkeys and spider monkeys.

After visitors were attacked by the fiercely territorial crab-eating Java monkeys, DuMond couldn’t bring himself to cage the primates so he had pathways carved through the terrain encased in wire tunnels. This gave rise to the jungle’s motto of “where humans are caged and monkeys run wild.”

Monkey Jungle includes North America’s only seminatural tropical Amazonian rainforest. As a complete ecosystem with predators such as hawks, raccoons and snakes, some monkeys are hunted as prey while other carnivorous monkeys will catch and eat baby raccoons and opossums. Daily feedings showcase the monkeys’ skin-diving prowess as they plunge into pools to retrieve fruit thrown by park guides. Admission is $29.95 for adults, $27.95 for seniors and $23.95 for children ages 3 to 9; the jungle is open 9:30 a.m. to 5 p.m. daily.

Zoo Miami covers more than 740 acres and contains more than 3,000 animals, representing more than 500 species, more than 40 of which are endangered. The zoo is also home to more than 70 species of birds, more than 1,000 types of plants, including hundreds of stunning orchids. Among the ranks of fauna are lions, tigers, crocodiles, elephants, gorillas, rhinoceroses, koalas, komodo dragons and the iconic pink flamingos. Feed a giraffe, camel, parrot or even a rhino. Explore on foot or take advantage of the air-conditioned, elevated monorail or a behind-the-scenes guided tram tour. The park is open 10 a.m. to 5 p.m. daily (except for special holiday hours), and admission is $22.95 for an adult ($18.95 for children ages 3 to 12), with special discounts available.

Formerly known as Parrot Jungle, Jungle Island is now an 18-acre, green-engineered tropical jungle that is home to hundreds of tropical birds, 2,000 species of plants and flowers, and lays claim to one of the best trained bird show in the world. Jungle Island traces its origins to when Austrian immigrant Franz Scherr opened a feed supply store and realized that people would pay to see his trained and friendly birds. As an acquaintance of Monkey Jungle founder, Joe DuMond, Scherr was inspired enough to start his own jungle where birds could “fly free.” Today, Jungle Island houses fish, reptiles, primates and mammals. Jungle Island is open every day of the year: 10 a.m. to 5 p.m. daily. Admission is $52.95 for adults and $39.95 for children ages 3 to 10, with discounts available. Jungle Island is located in the heart of Miami, off Interstate 395 between downtown Miami and South Beach.