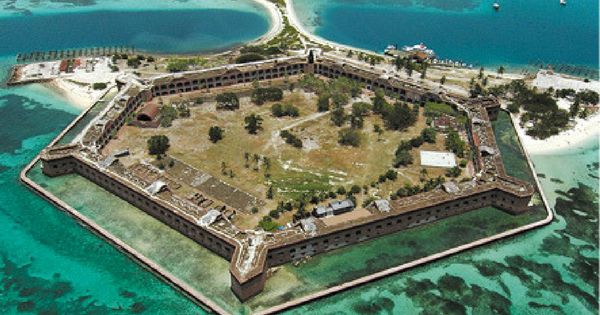 Seventy miles west of Key West and accessible only by boat or plane, Dry Tortugas National Park is a striking example of beauty. First discovered by Ponce de Leon in 1513, the seven-island chain of sand and coral shoals once teemed with giant sea turtles (tortugas), yet lacked any freshwater source, hence — dry. The military commissioned the construction of 450-cannon Fort Jefferson — strategically located in the Florida Straits — in 1846 but, due to the advent of the rifled cannon, the fort was obsolete before it was completed. The region is also part of a 46-square-mile preserve called the Research Natural Area. This no-take, no-anchor preserve ensures that endangered game fish have a sanctuary from detrimental commercial overfishing and that the island’s deteriorating coral reefs have an undisturbed refuge for scientific research. Park visitors can enjoy fishing, boating, swimming, snorkeling and scuba diving in the pristine subtropical coral community, regarded as one of the most well-preserved marine areas in the Florida Keys.