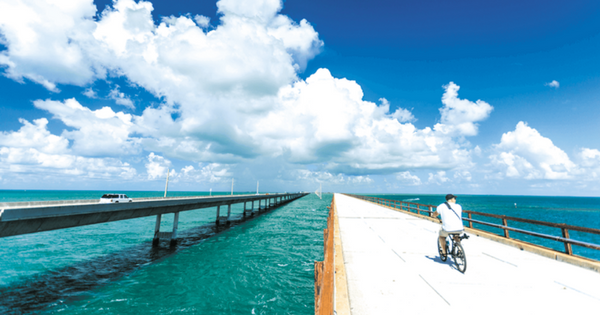 As you reach the last major island of the Florida Keys, you are entering the very southernmost city of the continental United States. Key West measures 1.5 miles by 4 miles. It is 93 miles north of Cuba and 153 miles southwest of Miami at 24.5 degrees above the equator. It’s tropical throughout the year with a history of frost-free weather.

Key West is connected to the mainland by the Overseas Highway (U.S. Highway 1), which was built on the old roadbed of the Florida East Coast Railway. The railway, built in 1902, was destroyed by a hurricane in 1935. Emerald-colored waters where the Gulf of Mexico and the Atlantic Ocean meet below the 42 bridges of the Overseas Highway make the drive between Miami and Key West especially beautiful.

Surrounding the Island City, 5 miles offshore, is the last living coral reef of the North American continent. Acting as a breakwater, the southernmost barrier reef reduces wave action, which normally washes sand ashore in other regions.

Along with a brilliant assortment of life forms, more than 600 varieties of edible fish can be found in the local waters including tarpon, amberjack, dolphin, king mackerel and many others. Fishing follows tourism as the second-most important industry of the island.

Drinking water once consisted solely of what rainwater could be caught from the rooftops and stored in backyard cisterns. Today, fresh water for the island is obtained from an 18-inch pipeline that was originally built by the Navy in 1942, subsequently sold to the county, and a desalination plant that was reportedly the largest in the world when it was built in 1967.

Along Front Street and Duval Street on the western part of the city, there are at least 50 stores that range from native “Conch,” Cuban and more conventional restaurants and bakeries, to English pubs and handicraft shops for gold and silver, candle-making and glassblowing, plus art galleries and antique shops. In Key West, one can buy fire-glazed ceramics, palm frond baskets and hats, homemade leather sandals and numerous other crafts practiced locally.

Sunset is observed here with a deep reverence and a rare harmony that draws newcomers, tourists, locals, the finely dressed and the not-so-dressed all together at the same place and time. An hour or so before the sun drops magnificently below the Gulf horizon, people from all parts of the island gather at Mallory Square on Front Street to enjoy the impromptu collection of fire eaters, jugglers, Congo drum players, iguana displays, dancers and banjo pickers. Just as the sun melts the sky into a liquid flame and slips below the water’s far edge, all is quiet along the wall — as if this natural wonder will never take place or be seen again. The inevitable round of applause from all onlookers eventually breaks the magic spell, however, and everyone steps into motion again to see what else there is to discover on this island of contrasts, personality and tropical beauty.