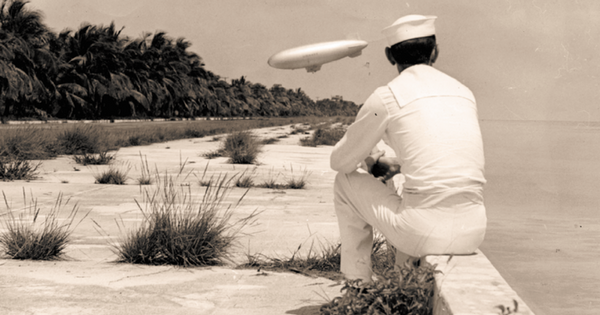 The military presence in Key West dates to 1823 when a U.S. naval base was established, commanded by Commodore David Porter, to suppress piracy in the surrounding waters. To combat pirates in the shallow waters around the region, Porter used an old New York steam ferryboat, the Sea Gull, to tow sailor-manned barges to cut off pirate escape routes. This was the first instance of a steam-propelled vessel being used in the Navy.

During the Civil War, more ships were stationed at Key West than at any other port in the United States. Key West remained in Union control during the war, which prevented the Confederacy from receiving much-needed war supplies from overseas. In 1898, the battleship Maine sailed from Key West to Havana Harbor where the ship’s loss sparked the Spanish American War. Once again, every available naval vessel was sent to Key West for the American war effort.

The nation’s southernmost naval base proved to be an ideal year-round training facility with rapid access to the open sea lanes and ideal flying conditions.

During World War I, the Navy’s forces expanded to include seaplanes, submarines and blimps. Ground was broken for construction of a small coastal air patrol station on July 13, 1917, at what is now Trumbo Point, on land leased from the Florida East Coast Railroad Co.

On Sept. 22 of that year, the base’s logbook recorded the first naval flight ever made from Key West — a Curtiss N-9 sea plane flown by Coast Guard Lt. Stanley Parker. About three months later, on Dec. 18, Naval Air Base Key West was commissioned and Parker became the first commanding officer. The base was primarily used for anti-submarine patrol operations and as an elemental flight training station. More than 500 aviators were trained at the station during World War I.

NAS Key West was placed in a caretaker status during the 1920s and ’30s. However, in 1939, as war appeared likely, activity at NAS Key West increased. More patrol and anti-submarine aircraft, as well as Navy destroyers, arrived with President Franklin D. Roosevelt’s signing of the Neutrality Act. The seaplane base on Trumbo Point was redesignated NAS Key West on Dec. 15, 1940, and served as an operating and training base for fleet aircraft squadrons. Other satellite facilities were established to support other war efforts, including Meacham Field for lighter-than-air operations on Key West, and a runway for land-based aircraft on Boca Chica. In March 1945, the satellite fields were disestablished and combined into one aviation activity designated as U.S. Naval Air Station Key West.

After the war ended, NAS Key West was retained as a training facility. It responded to the 1962 Cuban missile crisis, which posed the first doorstep threat to the United States in more than a century. Reconnaissance and operational flights were begun Oct. 22, 1962, in support of the blockade around Cuba. During the Cuban crisis, Key West cemented its claim to the title “Gibraltar of the Gulf,” coined a hundred years earlier by Porter.