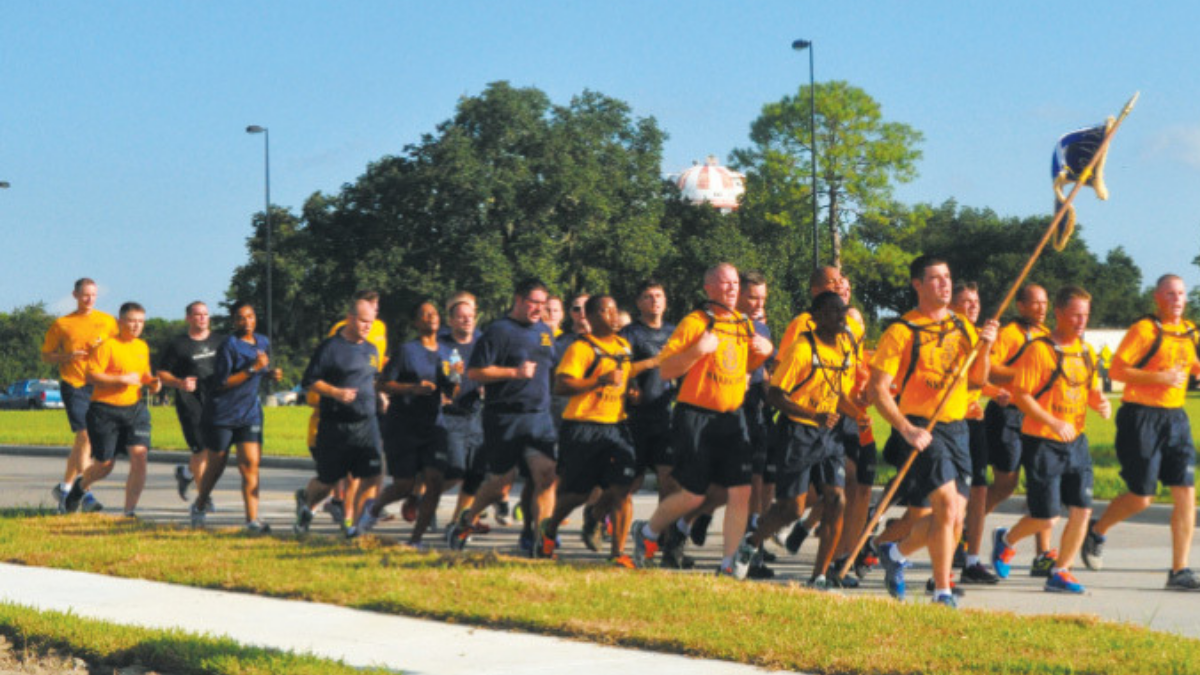 ASD New Orleans processes more than 28,000 requisitions and issues more than 24,000 repair parts from stock each year. In addition, it maintains an inventory of more than 12,000 parts valued in excess of $189 million. ASD New Orleans understands that “you can’t fly without supply” and strives to provide the best supply support possible to allow Navy and Marine Corps air forces to meet their mission.

On Aug. 1, 2006, the Office of the Secretary of Defense approved the FRC business plan, and AIMD New Orleans became Fleet Readiness Center Mid-Atlantic Site New Orleans. The implementation of FRCs is one of the Navy’s strategies to support the warfighter and achieve cost-wise readiness in the 21st century.

Navy aircraft are designed to fly hard, fast and in the worst conditions. Squadron technicians work hard to ensure that they perform at 100 percent. When the components of those aircraft need repair or maintenance, FRC brings intermediate-level maintenance expertise to the flight line and directly supports one F/A-18 Hornet squadron, one C-130T Hercules squadron and one Marine Corps squadron composed of UH-1Y Hueys and AH-1W Cobras. The FRCMA Det. New Orleans is a large maintenance operation with more than 160 Sailors, Marines and civil service employees working to keep the aircraft it supports up and flying.

Responding to the unique challenges of supporting four types or models of aircraft that routinely operate in support of the global war on terrorism, no other ashore FRC Det. this size has responded as effectively to meet or exceed all Navy and Marine Corps mission and fleet support expectations. FRCMA Det. New Orleans has met 100 percent of its commitments with unmatched success, leading other FRCs in key metrics of maintenance and logistics support, planeside performance, production and production resources.

The unit processed 34,779 maintenance actions in fiscal year 2015, maintaining an average ready-for-issue rate of 98.3 percent, an impressive metric for any intermediate repair facility. Whether it is through outstanding maintenance support, stellar customer service, emergency response or Lean Six Sigma initiatives, FRCMA Det. New Orleans sets the standard for others to follow.

Formerly a MSC Office/Ship Surge Detachment, the MSC was previously located at the old Naval Support Activity (NSA) on the eastbank of New Orleans. In October 2007 the MSC Ship Surge Detachment was disestablished and personnel were absorbed by Military Sealift Command Ship Inspection Branch N752, headquartered in Norfolk, Virginia.

After the closure of NSA New Orleans, the MSC N752 ship inspection personnel were relocated to NAS JRB New Orleans.

The Navy Air Logistics Office (NALO) was established in 1980, and the chief of Naval Reserve was appointed Chief of Naval Operations (CNO) executive agent for airlift. NALO is an Echelon IV aviation major command with a staff of more than 50 personnel. NALO schedules airlifts and tasking for 14 squadrons and 42 aircraft and has carried more than 4.5 million passengers and 925 million pounds of cargo since being established. NALO validates, prioritizes and schedules worldwide unique Navy fleet-essential airlift missions supporting combatant commander, fleet response and DOD requirements.

The Navy Operational Support Center (NOSC) New Orleans was formed in October 2004 with the merger of Navy Air Reserve New Orleans and Naval Reserve Center New Orleans. Originally located in several buildings across the base, the main elements of the command have operated out of the Frank J. Uddo Armed Forces Reserve Center (Building 492) since January 2005.

The Navy Reserve Professional Development Center (NRPDC) is the sole training command that impacts the entire Navy Reserve. NRPDC is composed of a staff of 36 instructors, facilitators and support personnel and is committed to developing a smarter, better-educated Reserve Force through training available to anyone, anytime, anywhere. There are two civilians assigned to the staff serving as the director of training and learning management and quota control coordinator. The command has nine departments: administrative, personnel, training/operations, supply, automated information systems, quota control, learning standards office, computer-based training and medical.

The mission of Navy Talent Acquisition Group (NTAG) New Orleans (formerly Navy Recruiting District) is to recruit the best-qualified men and women for active-duty and Reserve enlisted and officer service for America’s Navy to accomplish today’s missions and meet tomorrow’s challenges. Affectionately known as “Powerhouse” among its assigned Sailors and DOD civilian employees, NTAG’s scope of responsibility encompasses recruiting efforts throughout Louisiana, Mississippi, southern Alabama and the Florida Panhandle. While recruiting men and women to replenish the fleet is a primary responsibility of NTAG New Orleans, its team of professional Sailors is also charged with being ambassadors of good will who shape a positive image of the Navy in their local communities.

VA-204 received its first CNO Safety Award in 1973. The award represented more than 5,000 hours of accident-free flying that year. In 1975, the River Rattlers won the coveted F. Trubee Davison Award as the “Best Tailhook Squadron in the Naval Reserves.”

In March 1978, the squadron moved from NAS Memphis to NAS New Orleans and simultaneously began transitioning to the A-7B aircraft. The operational tempo increased in 1980 with numerous detachments ranging from NAS Bermuda to NAS Fallon and nearly everywhere in between. VA-204’s selection as the winner of the CNO Safety Award for 1980 was a proud end to a busy year.

On Jan. 28, 1991, the squadron celebrated 10 years of operations with no foreign-object damage and was ordered to transition to the Navy’s newest strike fighter, the F/A-18A Hornet. VA-204 officially redesignated to Strike Fighter Squadron 204 (VFA-204) on April 1, 1991, with the acceptance of its first Hornet. Just one year after the transition, VFA-204 received its sixth CNO Safety Award, marking a monumental 13 years and 50,000 Class “A” Mishap Free flight hours.

By 2000, the squadron had racked up 20 years and nearly 70,000 flight hours of Class “A” mishap-free operation. In 2001, the squadron maintained adversary support with five detachments and a historic “Around the Horn” embarkation on board USS Nimitz (CVN 68). As the events of 9/11 rocked the world, the River Rattlers set sail to offer fleet protection and training as Nimitz transited around South America, changing its homeport from Norfolk, Virginia, to San Diego. In 2003, the squadron again earned the CNO Safety Award.

Flying more than 193 sorties, the squadron delivered more than 174,000 pounds of live ordnance and provided counter-air protection and interdiction during a complete war scenario.

In August 2005, Hurricane Katrina presented unprecedented challenges for the River Rattlers. With less than 48 hours’ notice, the squadron evacuated New Orleans to NAS JRB Fort Worth, Texas. The squadron was able to quickly reconstitute and return to NAS JRB New Orleans without any loss of life or damage to valuable Navy assets. The squadron was, once again, recognized with the CNO Safety Award for 2005.

The following year, the River Rattlers passed the 26-year mark and 87,000 hours of Class “A” mishap-free operations and received another CNO Safety Award. In 2007, they once more provided professional adversary support on a worldwide stage and were again awarded the Battle “E.” The River Rattlers excelled as both an adversary and strike fighter squadron in 2008. During a strike detachment supporting Exercise Northern Edge, the squadron completed 964.4 flight hours and 672 sorties with a 98 percent overall sortie completion rate in support of fleet requirements.

The highlight of 2011 was the N’Awlins Air Show, held May 7 and 8 at NAS JRB New Orleans. On May 8, River Rattler aircraft took to the skies over Southern Louisiana exactly 100 years from the day naval aviation was born. In addition to participating in the Centennial of Naval Aviation, the River Rattlers conducted eight detachments in support of fleet training.

The year 2012 culminated in a highly successful detachment in which the squadron expended nearly 100,000 pounds of live air-to-ground ordnance and 10 air-to-air missiles. As a result of VFA-204’s spectacular performance over the course of the year, the command was awarded the 2012 Battle “E,” Golden Wrench and Commander, Naval Air Force Reserve Squadron of the Year honors.

In 2013, the River Rattlers were able to refocus on the fundamentals of F/A-18 air-to-air and air-to-ground employment in a way that had not been possible for several years. This “re-blue” culminated in an entire squadron carrier qualification detachment to Oceana, Virginia, in the late summer.

VFA-204 transitioned to the F/A-18C in 2018, further enhancing its warfighting capabilities with an advanced combat systems and avionics suite. The River Rattlers continue to set the bar high, proving that the experience and expertise in this Naval Reserve squadron rival those of any unit, anywhere, anytime.

Fleet Logistics Support Squadron (VR) 54 was commissioned as a Naval Reserve Force Squadron on June 1, 1991. Located at Naval Air Station Joint Reserve Base New Orleans, VR-54 was the first Navy Reserve squadron to fly the Lockheed C-130T “Hercules.” The squadron operates four C-130T aircraft with a normal maximum takeoff weight of 165,500 pounds, able to carry any combination of up to 92 passengers and 40,000 pounds of palletized cargo, heavy trucks or light armored vehicles. Due to the diverse capabilities, VR-54’s mission includes everything from transporting a deploying carrier air wing to flying supplies to remote corners of the world. Nicknamed The Revelers, the squadron bears the colors purple, green and gold, symbolic of the official colors of Mardi Gras.

The Revelers are composed of both active-duty and Reserve personnel working together to meet the squadron’s mission. There are more than 200 highly trained and motivated aircrew, maintenance and support personnel who make up the squadron. The majority of the skilled professionals are on active duty, while approximately 40 percent are drilling Reservists who commute from numerous states to New Orleans to meet a commitment to train and operate at least one weekend each month and for one two-week detachment per year. For aircrews, this commitment is often much more. These “Citizen Sailors” come from all walks of life including educators, attorneys, doctors, businessmen and businesswomen, airline pilots, engineers, police officers, college students, farmers and carpenters. All of these elements combine smoothly into a team with tremendous ability, experience and motivation.

VR-54 is actually the rebirth of a previous squadron of the same designation that was also stationed aboard NAS JRB New Orleans. The original VR-54 flew the C-118 Liftmaster transport aircraft and was decommissioned in the early 1980s when the Navy introduced the C-9 Skytrain. The members of VR-54 log upward of 2,000 flight hours annually supporting worldwide (hence “World Famous”) logistics mission. Any given year VR-54 provides six to eight months of air logistics detachment support to the European Command, Pacific Command and Central Command; in fiscal 2017, the squadron supported 1,768,642 pounds of cargo and 808 passengers while conducting 120 missions and 163 lifts worldwide.