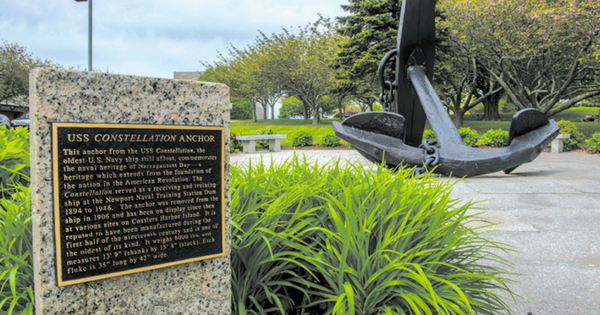 On Sept. 20, 1884, Rear Adm. Stephen B. Luce, USN, was relieved as Commander, North Atlantic Squadron and was rowed from the flagship USS Tennessee anchored off Newport to Coasters Harbor Island, 2 miles north of the center of Newport. Once on the island, as the Army and Navy Journal reported, Luce proceeded to a large stone building built in 1819, the former Newport Asylum for the Poor, climbed its rickety steps, and as he put his hand on the front door, solemnly declared to his few companions and the empty grounds, “Know all men by these presents, and in the name of the Father, Son and Holy Ghost, I christen this building the War College of the American Navy.” Two weeks later, on Oct. 6, 1884, Secretary of the Navy William Chandler issued General Order 325, formally establishing the Naval War College.

Today, the “little poorhouse” is a well-preserved and stately structure, a National Historic Landmark and home to the Naval War College Museum. Named Founders Hall in honor of the founding fathers of the college, it is uniquely suited for its current purpose. In addition to being the original home of the oldest war college in the United States, it is where Capt. Alfred Thayer Mahan, USN, the college’s president from 1886 through 1889 and 1892 through 1893, first delivered his lectures on sea power. These lectures, first published in 1890 as the epochal “The Influence of Sea Power upon History, 1660-1783,” were the first in a series of Mahan’s books that marked the beginning of modern naval strategic and historical studies. Today, the Naval War College Museum is one of 10 official U.S. Navy museums. It is operated under the Naval History and Heritage Command, Washington, D.C., in cooperation with the Naval War College.

The museum’s themes are the history of naval warfare, particularly as studied at the college, and the naval heritage of Narragansett Bay — a tale that begins with the nation’s colonial roots. Its collection consists of items relating to these subjects that are perceived to be of value to scholarship, and these form the core for exhibits throughout the college and for educational outreach projects. Besides permanent exhibits about the college, the genesis of the Navy in the region and the evolution of permanent naval installations from the late 19th century to the present, the museum features short-term special exhibits relating to the college curriculum and to current naval-related topics. In general, the museum exhibits identify milestones in the evolutionary development of war at sea; explain the significance of the sea as a factor in the formulation and the attainment of national policy objectives; describe the character, educational philosophy and mission of the college; and chronicle the eventful relationship of the U.S. Navy with Narragansett Bay and its people.

Public access to the museum with a personal vehicle is through Gate 1 of U.S. Naval Station, Newport. For reservations, call 401-841-4052 at least five working days in advance. Reservations and two forms of government-issued identification are necessary to enter the Naval Station for those without Department of Defense identification. Foreign nationals require two weeks’ advance notification. Visitors must stop at the Pass Office before proceeding to Gate 1.