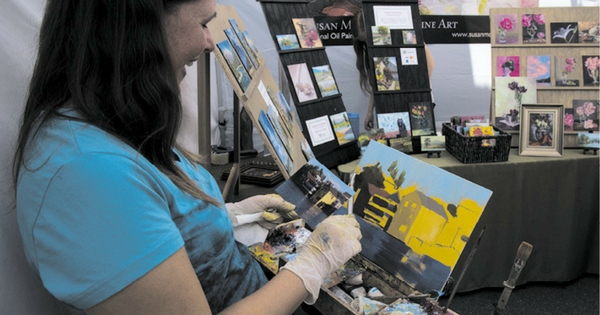 Island County residents enjoy a wealth of artistic endeavors, from theaters to music to dance and more.

One of the premier spaces for the performing arts in nearby Snohomish County, Everett Performing Arts Center (EPAC) offers a more than 500-seat auditorium with a proscenium stage, including full theatrical lighting and sound systems, an orchestra pit, rigging/fly system, wing space, shop and costume facilities. Along with the auditorium, EPAC has a multipurpose community room and spacious lobby area, making the entire facility ideal for a wide range of activities.

The Everett Philharmonic Orchestra performs at the Everett Civic Auditorium and Everett Presbyterian Church. The orchestra musicians come from varying professional backgrounds united by their passion for performing symphonic music. Under the baton of Paul-Elliott Cobbs, this group has played together for more than 25 years.

This 113 year-old performance space is one of the historical gems in the community which was saved from the wrecking ball by many dedicated community members willing to donate time, money and spirit to make sure that Everett did not lose one of the most recognizable buildings in the downtown area. There is always something to see at the Historic Everett Theatre, from concerts by world-famous entertainers to live theatre productions with the theatre’s own Outcast Players. Every week boasts something new and exciting. Hours are 11:30 a.m. to 4:30 p.m. Tuesday through Saturday.

The Island Shakespeare Festival is a three-month-long celebration from July through September of the acting craft. While the Bard is the featured playwright each year, the festival also schedules the works of others. One evening you may go to see Shakespeare, the next, another leading playwright. For details on this season’s offerings, visit www.islandshakespearefest.org.

Pacific Northwest Ballet, one of the largest and most highly regarded ballet companies in the United States, was founded in 1972. The company of nearly 50 dancers presents more than 100 performances each year of full-length and mixed repertory ballets at Marion Oliver McCaw Hall in Seattle and on tour. The company has toured to Europe, Australia, Taiwan, Hong Kong, Canada and throughout the United States.

The Clyde Theatre was built in 1937 – the height of the Depression – by Norman and Hazel Clyde. Although a lot more humble than the grand movie palaces being built in the big cities, the new theater was greeted warmly by folks on South Whidbey. After being purchased in 1972, a small stage was added to show live performances of musical acts. Today, the theater offers current movie selections. Visit the website for current movie listings.

Whidbey Island Center for the Arts

Whidbey Island Center for the Arts is dedicated to offering high-quality performances exposing residents and students to local and nationally recognized artists, musicians, literary works and authors as well as the chance to be a part of in-house full-scale theater productions. Between October and June, there are over 85 total performances in the 246-seat theatre requiring anywhere from 350 to 400 volunteers in a variety of positions.

The Whidbey Playhouse has been presenting live theater in Oak Harbor for 50 years. Since its first production, Madame President in 1966, the Playhouse has presented hundreds of musicals, dramas, comedies, melodramas, mysteries, youth productions, variety shows and original musical reviews. Currently, the Playhouse produces five shows (plays and musicals) during the regular season (September through June), plus a full youth theatre program with workshops and summer productions.