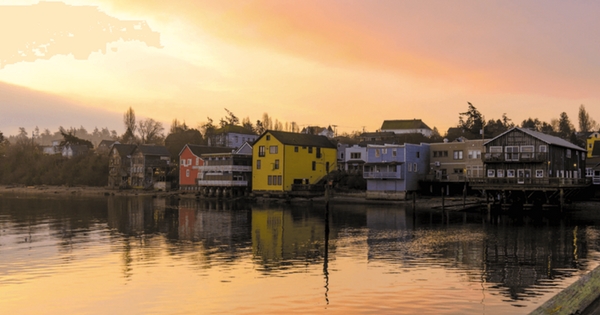 The charm of island living, a mild climate, natural beauties and a small-town lifestyle coupled with easy ferry access to the vital city of Seattle contribute to a high quality of life not often found elsewhere. In 2015, an estimated 80,593 people called Island County home, the Census said, with just under 377 residents per square mile.

In 2016, Naval Air Station Whidbey Island, in Island County, had a base population of approximately 7,500 military personnel, 1,200 civilian employees and 1,200 contractors for a total of 9,900, most of whom live off base in surrounding communities. The Census counted 12,634 veterans residing in the area in 2014. It’s the largest naval aviation installation in the Pacific Northwest as well as one of the four naval installations forming Navy Region Northwest.

The counties’ communities give newcomers plenty of choices when selecting a home. Enlist the help of a reputable real estate agent to help you sort through the area’s home options. The Washington Association of Realtors is a central source of local real estate information and services. Visit http://warealtor.org to find expertise and professional services for those interested in purchasing a new home.

Washington’s Island County, which was a county before the state became a state (1852 vs. 1889), has become increasingly popular with artists and retirees looking for pleasant, supportive surroundings in a stunning setting, but the secret is out as well with mainland city dwellers looking to build summer homes, and with tourists. The farming, timber and fishing that were early mainstays still contribute flavor to the economy, and the military has underwritten the financial base since January 1941, when the Office of the Chief of Naval Operations ordered the 13th Naval District to develop a new Puget Sound seaplane base, then a new airfield for land-based aircraft. Naval Air Station Whidbey Island was officially commissioned in September 1942. Nine islands make up Island County, with Whidbey and Camano being the most populous; the other seven — Baby,
Ben Ure, Deception, Kalamut, Minor, Smith and Strawberry islands — are small, mostly uninhabited, timbered bumps surrounded by saltwater but crucial to the region’s bird life and as seal haul-outs.

The largest island in Washington state, Whidbey Island is about 55 miles long and from a mile and a half to 12 miles wide, though its meandering shape makes precise measurements near-impossible; Coupeville, the county seat, is the county’s oldest town (and the second-oldest in the state), and much of its historic architecture has been meticulously preserved. In addition to high saltwater bluffs, beaches and rolling hills crowned by madrone, fir, spruce, hemlock, cedar and alder, oak and pine, there are four lakes: Cranberry (Deception Pass State Park); Deer (Deer Lake Park); and Goss and Lone lakes near Langley, on the island’s south end. Three fertile prairies — Ebey, Smith and Crockett — have drawn farmers since the 1850s, and as to seawater farming, high-end restaurants worldwide vie for the mussels, clams and oysters from Coupeville’s Penn Cove Shellfish, the oldest and largest commercial mussel farm in the U.S. Outdoor activity is easy; hiking, for instance, is year-round, and it requires little specialized equipment to walk an old-growth forest trail, a beach or a prairie. Sailing, kayaking and fishing are popular and accessible. The Deception Pass Bridge, on State Route 20, links Whidbey Island to the mainland by way of Fidalgo Island. Washington State Ferries runs the Coupeville to Port Townsend route off SR 20, and the Clinton to Mukilteo ferry, on the island’s southeast edge, off SR 525. Major communities include Coupeville, Oak Harbor, Langley and Freeland.

Known to islanders as the heart of the Ebey’s Landing National Historical Reserve, Coupeville is responsible for much of the antiquarian preservation on Whidbey Island, starting with its historic waterfront district and wharf on Penn Cove.

Pay a visit to the Island County Historical Society Museum, which chronicles the island’s rich heritage (www.islandhistory.org). Since 1963, the museum’s address has changed several times, beginning with its occupancy of the former General Telephone Co. exchange building. Then from 1968 to 1991, it was in the Coupeville Fire Hall. In 1991, construction of the new museum was completed on the site of the former Blockhouse Inn, a new location that offers dazzling views of Penn Cove and the Coupeville waterfront.

For more than 20 years, Coupeville has hosted the annual Penn Cove MusselFest, “Bold, Briny and Blue,” with its multiple musical performances, children’s activities, chowder-tasting and a chowder-eating contest, as well as tours of the historic shellfish farm.

During the summer, Town Park is the spot for “Concerts on the Cove” (www.concertsonthecove.org), and the park’s short waterfront footpath leads to shopping areas and the town boat launch. The winter concerts are held at South Whidbey High School.

If adrenaline is your muse, many of Coupeville’s parks offer kayaking, biking and rewarding hiking trails, spanning forests and seaside vistas.

For a blend of history and action, visitors can scuba dive at Fort Casey State Park or the adjacent Keystone State Park, both underwater parks, where they can discover indigenous jellyfish, porpoises, otters, sea lions and maybe even a gray whale or an orca. The Admiralty Head Lighthouse offers sweeping views of the Whidbey Island shoreline and the Olympic Pennisula.

Every October, kids and adults gather at Cook’s Corner Park for the Halloween Torchlight Parade then proceed along Front Street through the heart of downtown Coupeville.

Homes in the Coupeville area range from well-established neighborhoods to new construction. Median rent in 2014 was $900, selected monthly owner costs of housing units with a mortgage were $1,713 and mean travel time to work for those living in Coupeville was a little under 21 minutes. Overall, the cost of living is 27 percent higher than the national average.

Picturesque Oak Harbor’s modern culture is steeped in history. Settled in 1849 by seafarers who established a trade port on Puget Sound, the community is now nearly 9 miles wide. The town was given its name by a pioneer physician, Dr. Richard Lansdale, because of its abundance of Garry oak trees, a relatively rare species.

The township enjoyed both a financial and population boom in the 1890s when Dutch settlers from the Midwest and Canada took up prosperous farms on its rich soil. Today, windmills, Dutch architecture and tulips still bear witness to that heritage. Many of the town’s oldest structures were built near the harbor, since the water trade was the main initial source of income.

One of the city’s major employers, the Navy, moved in just 6 miles to the northwest of Oak Harbor in 1941 to bolster the war effort and continues to be a principal benefactor. Oak Harbor remains the closest town to the base.

Hopeful Oak Harbor home-shoppers have plenty of condos, townhouses, single-family dwellings and land for new construction to choose from. The median selected owner costs for a home with a mortgage was $1,661, median rent was $1,084, and mean travel time to work was 17.5 minutes for the estimated 22,693 residents. The overall cost of living was 18 percent higher than the U.S. average.

Some say that Langley has the best of both worlds: a sweeping bluff overlooking the channel of Saratoga Passage, as well as a breathtaking 180-degree view of the Cascade Mountains.

Langley is also known for its high density of cottages, bed-and-breakfasts and inns, top-notch artists and craftspeople, delicious food and huge numbers of feral rabbits, love-bunny progeny from a reputed break-out at the Whidbey Island Fair’s 2001 rabbit competition. By 2015 the loose lapins had become so numerous that they were digging up school sports fields, undermining buildings and clear-cutting prized gardens, and the town split between rabbit-stew and cherish-the-bunnies factions. The situation remains unresolved but did furnish dramatic material for Langley’s 2016 Mystery Weekend, an annual event when the whole community takes part in a frisky murder-mystery play.

In addition to its natural beauty, Langley’s Seawall Park also shelters endangered species and local flora. Bald eagles, herons and sea lions dwell there, orcas visit and gray whales migrate past the park’s shoreline in spring, prompting Langley to start a new tradition: Welcome the Whales Day. A small pod of gray whales has been sighted every year around early March and lingered through May. Visit http://whidbeycamanoislands.com/welcome-the-whales-day-april-16 for more information.

If entertainment is your focus, the Whidbey Island Center for the Arts (www.wicaonline.com), a 246-seat theater, hosts performances, workshops and lectures.

As to shopping, Langley has numerous specialty, craft and clothing shops, with items created by local artists.

Many people would like to add to Langley’s population of 1,077, so housing can be tight and expensive. Selected monthly owner costs for homes with a mortgage were $1,884, median rent was $1,041 and average travel time to work was a little over 34 minutes. The cost of living was 36 percent higher than the U.S. average, largely because Langley housing costs were
97 percent more.

Three Seattle socialist idealists founded Freeland in 1900 as a utopian community, the idea being that all residents would get free land in return for working for the common good. The group effort broke apart in squabbles and bankruptcy in 1920, but the individuals who stayed created a pleasant, rural beach-front village. Visitors can spend the night at one of the many inns, cottages and bed-and-breakfasts, and in the morning, take a leisurely stroll down Double Bluff Beach. In addition to its amazing panoramic views of Mount Rainier and Seattle, the beach is dotted with places to picnic, leash-free dog areas and collection sites for driftwood aficionados.

At nearby Freeland Park, you can host a picnic at one of its many waterfront tables, dig for clams or simply watch windsurfers and boaters. And what waterfront park would be complete without a playground? Freeland Park has a quaint playground next to the picnic areas, ideal for family get-togethers.

The most recent count showed 1,486 residents of Freeland, where selected monthly owner costs for a house with a mortgage ran $1,667, average rent was $1,098, and travel time to get to work averaged 31.3 minutes. Overall, Freeland living expenses were 33 percent higher than the U.S. average.