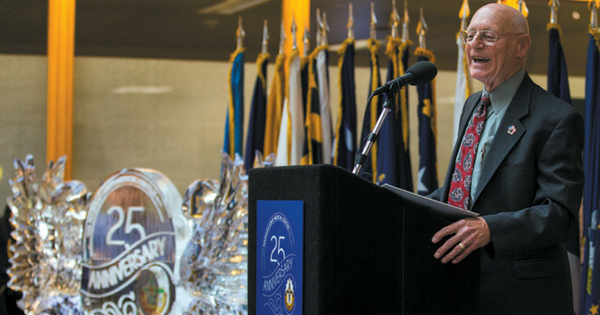 New and old commanders, staff and patients celebrated the 25th anniversary of the Madigan Army Medical Center hospital on Feb. 28, 2017, at Joint Base Lewis-McChord, Washington.

“Twenty-five years ago, the doors to this new hospital opened, and since then, Madigan has been leading the way in providing world-class military health care,” said Col. Michael Place, Madigan’s commander.

Another special reunion took place at the event between a doctor and patient in the audience; in 1995, the new hospital saw its first limb correction surgery when (then-major) Dr. Clyde Carpenter performed the surgery on 4-year-old Jeannine Johnson.

“The 10-hour surgery was a success, saving young Jeannine’s leg from amputation. Now, at age 26, Jeannine spends part time in a wheelchair… the other part is typically in a race car,” said Place.

In total, more than 100 audience members joined in the celebration, going on a journey with the speakers from the beginning of Madigan itself when the now-Madigan Annex was built in the 1940s to the opening of its doors here in 1992. In 1944, the “Fort Lewis Station Hospital” opened as a barracks-style complex, with nearly eight miles of ramps and corridors spread out over 75 acres. Thirty years later, proposals for a new building hit Congress, but it wasn’t until the 1980s that the plans got funding.

Five and half years after breaking ground, the doors opened to the new hospital, allowing service members, retirees and family members to get inpatient and outpatient care in a 1.2 million-square-foot facility.

“Since we began patient care in this new hospital, Madigan has set the bar for health care facilities and academic institutions, both military and civilian,” said Place.

The spirit of innovation that existed in the 1990s echoed over time to modern day medicine at Madigan. While in 1992 Madigan implemented the use of the Medical Diagnostic Imaging System which led to the hospital becoming the most modern medical center in the Army at the time, in 2007 Madigan’s Andersen Simulation Center became the first Department of Defense institution to be accredited by the American College of Surgeons as a Level I Educational Institution. Likewise, in 1994, Madigan opened a breast diagnostic center; today Madigan’s Breast Imaging Center is one of three in the Department of Defense to be awarded the American College of Radiology Gold Seal for Breast Imaging Excellence.

Burger, who took command of the new hospital one month after it opened from Brig. Gen. (ret.) John Hutton (who also served as President Ronald Reagan’s physician), oversaw Madigan becoming the first in military medicine to get digital imaging. Today, Madigan is the first large medical facility in all of the Department of Defense to implement its new electronic health record, MHS GENESIS.

This focus on information technology modernization is one of the bigger changes Peake’s seen in Army Medicine from his time at Madigan in the 1990s to today.

“(It’s) the recognition that the IT systems are fundamentally important to the care of patients and to the efficiency of the organization,” said Peake, who also served as the Army Surgeon General and the Secretary of Veterans Affairs.

In fact, Madigan is consistently recognized for being one of the “most wired” hospitals in America. The hospital continually seeks to make upgrades to both its IT and physical infrastructures, to include renovating its décor in the past few years.

“It looks as beautiful today as it did 25 years ago and that’s a credit to all of you who have served before and are serving here now, and who will be serving (in the future),” said Burger.