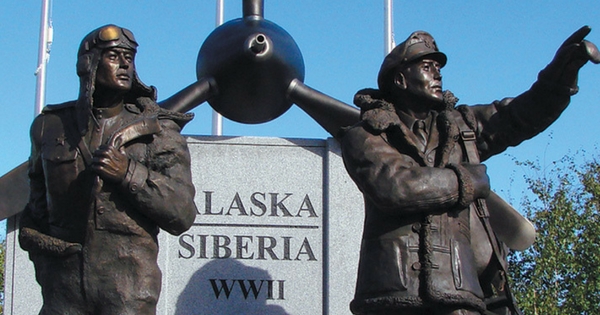 The purpose of the station, named Ladd Field, was to test aircraft operations in arctic conditions. However, when war broke out with Japan in late 1941, Ladd Field became a critical link in the Alaska-Siberia Lend-Lease route. From 1942 until the fall of 1945, American crews flew almost 8,000 aircraft to Ladd Field, where the planes were turned over to Soviet air crews for the continued flight westward. The planes were eventually used by the Soviets against Germany.

Eielson Air Force Base, 26 miles southeast of Fairbanks, was built shortly after the Army Air Corps separated from the Army and became the U.S. Air Force by an act of Congress in 1947. At that time, Ladd Field was also under Air Force control.

On Jan. 1, 1961, the Army reassumed control of Ladd Field and renamed the installation Fort Wainwright, after Gen. Jonathan M. Wainwright. Wainwright and his men gallantly defended the Bataan Peninsula and Corregidor Island in the Philippines during the early months of World War II.

Fort Wainwright has been home to several units, including the 171st Infantry Brigade (Mechanized), a Nike-Hercules battalion, the 172nd Infantry Brigade and the 6th Infantry Division (Light). The 6th ID (L) was deactivated in July 1994 and replaced by U.S. Army Alaska, with headquarters moving to Fort Richardson.

The fort is also home to Medical Department Activity-Alaska, Dental Activity-Alaska and Bassett Army Community Hospital. The hospital is named for Capt. John Bassett, a doctor killed while trying to evacuate wounded Soldiers during the Battle of Attu in World War II.

Fort Wainwright has a commitment to excellence in efforts to make the post a better place to live and work. With the move of 6th ID (L) headquarters to Fort Wainwright in 1990, many new sets of family quarters were built, as well as a PX-commissary mall, a physical fitness center and maintenance facilities.

The fort has 6,900 Soldiers and approximately 8,360 family members. About 1,530 Army and DOD civilian employees work at Fort Wainwright.