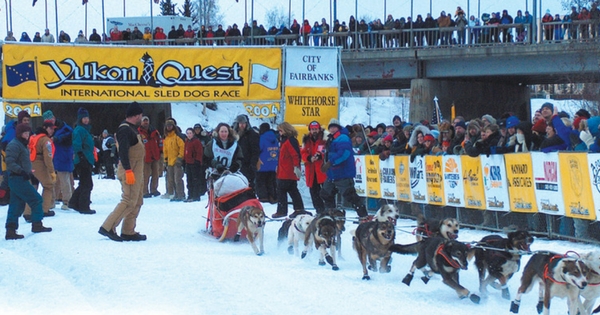 The Alaska Dog Mushers Association hosts Sunday races at the Jeff Studdert Race Grounds on Farmers Loop Road, featuring skijoring, four-dog, six-dog, eight- to 10-dog and open classes throughout the winter. Championship races are held in February and March. These races are great fun to participate in or watch, and getting involved in this exciting Alaska pastime is a great way to enjoy winter outdoors.

The Yukon Quest is a 1,000-mile international sled dog race between Fairbanks, Alaska, and Whitehorse, Yukon Territory, Canada. The early February start alternates each year between Fairbanks and Whitehorse, with a Fairbanks start in even-numbered years. The Yukon Quest Trail follows historic Gold Rush and mail delivery dog sled routes from the turn of the 20th century. Yukon Quest dog teams compete over two weeks with mushers guiding their canine athletes across frozen rivers and lakes and over mountain summits in the heart of the Arctic winter. Race promoters say: “The Yukon Quest is a clear demonstration of the indomitable spirit of people and animals. The legacy is that of the proud, strong and adventurous people whose lives sometimes depended on their dog teams and their own Arctic survival skills. The history of the North lives on in the Yukon Quest and in the thousands of people from the Yukon and Alaska who have worked so hard in support of this event.”

This qualifier for the Yukon Quest and Iditarod sled dog races is 300 miles of mushing in early February.

Late February finds the finishers arriving in Fairbanks for this 1,971-mile race that begins in Wasilla and tests the endurance and skills of snowmachine racers from Wasilla to Nome and back to Fairbanks. Presenting sponsor is the National Guard.

Ice-sculpting artists from around the world participate in the World Ice Art Championships in Fairbanks beginning in late February each year. The sculptures remain on display through late March, weather permitting.

You can find the festival at the University of Alaska Fairbanks campus in late February or early March. The three-day event celebrates Alaska Native culture with singing, dancing, traditional foods, arts and crafts.

The Chena River gathering and races of snowmachiners with vintage sleds from 1975 and before is held tentatively the second weekend in March. Racers choose among the 8-mile Jurassic Classic, 22-mile Tired Iron Classic, Wet Iron, Wired Iron and Fun Run races.

The Nordic Ski Club of Fairbanks holds 20K and 50K cross-country ski races through Birch Hill Recreation Area trails, with a downtown start and finish in late March each year.

Early April signals this annual event, held since 1935. The Fairbanks Curling Club, organized in 1905, is the oldest club devoted to any sport in Alaska. Curlers ages 5 to 85 participate in this sport throughout the winter.

Each team entry in this early April race pairs a downhill skier with a snowmachiner. More than 13,000 spectators and participants converge for five days at Summit Lake, Mile 196 of the Richardson Highway, to cheer on 80 teams.

Sponsored by the Fairbanks chapter of the Alaska Travel Industry Association and Fairbanks Convention & Visitors Bureau, this 4K graze held in May is a walk through downtown, sampling goodies from local eateries and raising money for Alaska charities.

The first 5K run/walk of the season, which benefits the local community, is sponsored by the Fairbanks Rotary Club, Fairbanks Memorial Hospital/Banner Health and BP. All proceeds from the early May race benefit local charities and the Fairbanks community.

Immerse yourself in fresh produce and Alaska products every Wednesday, Saturday and Sunday throughout the summer at the Tanana Valley Farmers Market at College Road and Caribou Way.

Enjoy a day of free music at Pioneer Park in February and in early June featuring folk, bluegrass, blues, jazz and Celtic music and fun for the whole family.

June’s Yukon 800 Mile Marathon, the “grandfather of Alaska’s contemporary endurance races,” has been held annually for nearly 50 years. This two-day, high-speed riverboat race on the Chena, Tanana and Yukon rivers through hundreds of miles of vast Alaskan wilderness has been called “the longest, roughest and toughest speed boat race in the world.”

Held annually on the summer solstice, this unique game is played at night without the use artificial lights. First pitch is at 10:30 p.m. in Growden Memorial Park.

This Summer Solstice event, held annually since 1983, is a 10K run/walk race complete with costumes for a festive celebration of the midnight sun.

A traditional Indian powwow with drums, dancing and cultural exchange by Alaska Natives, American Indians and First Nations People of Canada is held in Fairbanks each year in mid-July. The three-day powwow hosted by the Midnight Sun Intertribal Powwow Council is a spiritual event that honors elders and children and also educates the general public.

About 1,000 adults participate every year in this two-week, multidiscipline, study and performance festival held the last half of July. Nearly 100 guest artists offer workshops and master classes in music, dance, healing arts, theater, opera, figure skating, and the literary and visual arts.

The first World Eskimo Olympics was held in Fairbanks in 1961. Contestants and dance teams from across the circumpolar north gather for athletic contests, dancing, cultural arts and crafts, and regalia, along with a beauty pageant and a baby contest.

Five days of festivities around the third week of July include a parade, a pancake breakfast, a river regatta, a rubber duckie race, a beer festival, music, food, crafts and family entertainment.

The Equinox Marathon is a mid-September, 26-mile trail run, a 50K ultra marathon and a relay.

The annual convention of the Alaska Federation of Natives in October alternates between Fairbanks and Anchorage.

Interior Alaska’s state fair is nine days of family fun beginning around the first week of August. Exhibits of produce, agriculture and crafts, along with numerous food and merchandise vendors, add to the fun and amusement of midway carnival games and rides.