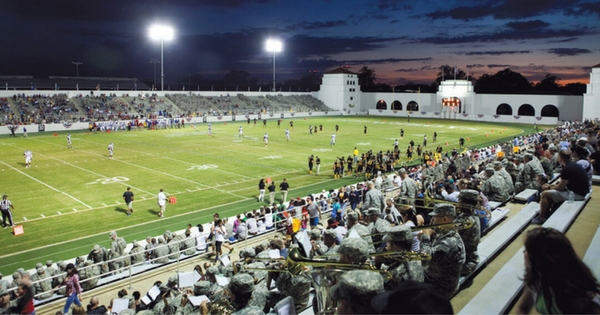 Catch a game this fall at Doughboy Stadium. When Fort Benning constructed a football stadium in 1925, it was dedicated to the infantrymen who died during WWI. The dedication of Doughboy Stadium was celebrated Oct. 17, 1925, with a game between the Blue Tide of Fort Benning and a team from Oglethorpe University out of Atlanta before a crowd of 9,000. Fort Benning’s decisive 27-6 victory foreshadowed a lengthy period of success for Fort Benning football. Dwight D. Eisenhower, who earned five stars before becoming president of the United States, helped coach the Doughboys to an all-Army championship the following year. Fort Benning quickly earned a reputation as a contender among colleges throughout the Southeast, playing teams from the universities of Florida, Georgia and Alabama. The success of the Doughboys waned when Fort Benning Soldiers were called to fight in Vietnam. The installation fielded post teams up until 1983, when the decision was made to disband the team in favor of a strong intramural program. The program was resurrected in 2009, and you can catch any number of games, including the annual Doughboy Bowl against Columbus State University, every fall. Games are free and frequently include vendors, activities for kids, entertainment and more.

Catch a game at Gowdy Field. Fort Benning’s most historic baseball and softball field was built with leftover funds donated for the construction of Doughboy Stadium. It is named in honor of Sgt. Harry “Hank” Gowdy, the first Major League Baseball player to enlist in WWI. He served in the 166th Infantry, 42nd “Rainbow” Division, and saw action in all the unit’s major battles. Gowdy returned to the pros after the war and caught for the New York Giants, who beat the Washington Senators, 9-6, at Gowdy Field on March 31, 1925, as part of Gowdy Field dedication day activities. Gowdy later returned to the Army at age 53 after Pearl Harbor was attacked. He received a commission and was sent to Fort Benning where he served as the athletic training officer. By war’s end, he attained the rank of major. Jackie Robinson, Whitey Ford, Chuck Stobbs and even Cal Ripken Jr. were among the many notables who played ball on Gowdy Field. These days, intramural teams and the Fort Benning men’s softball team play at Gowdy regularly, and you can attend these events for free.

MWR’s Sports, Fitness and Aquatics Division hosts the annual Fort Benning Race Series, which includes a number of events on post and off. These competitions are open to the public and most include prizes awarded to top finishers in each division. Register for any of these events at Smith Fitness Center or www.active.com. The Race Series includes the Chesty Puller Half Marathon Trail Run, the Reverse Sprint Triathlon, the Oktoberfest 10K Cross Country Challenge and a number of other races in the surrounding communities. For more information, call 706-527-2275.