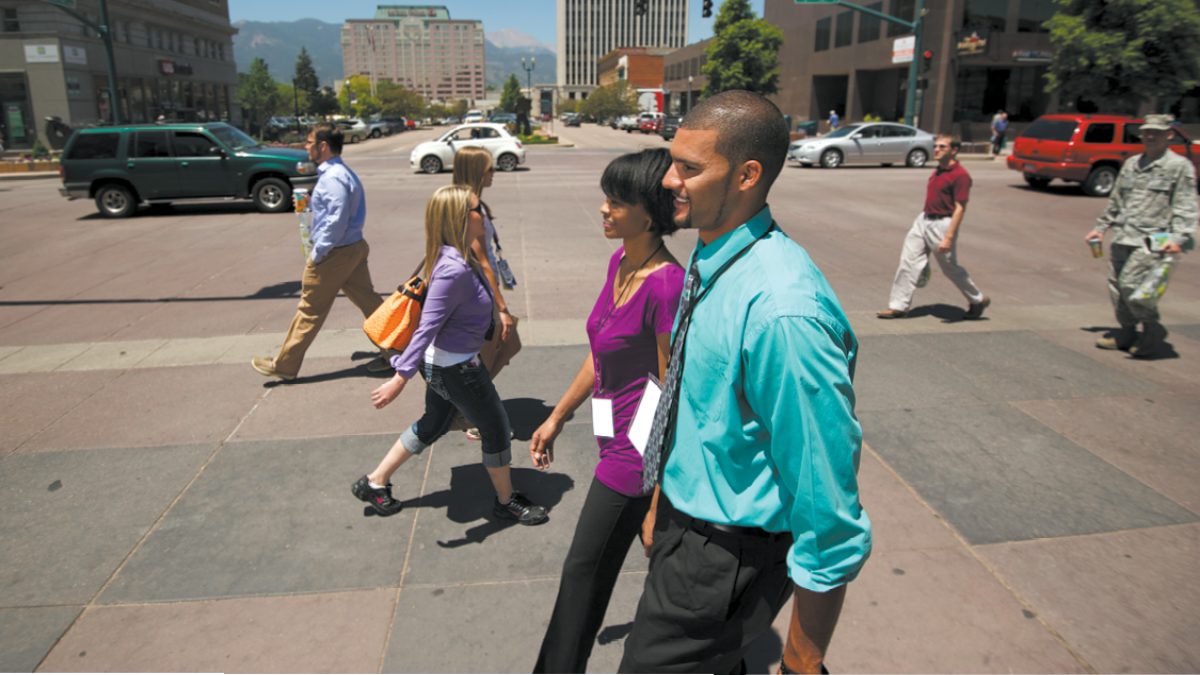 What is now called Colorado was originally part of New Spain. The Spanish heritage lingers on in the names of cities and places, particularly in southern Colorado. The Sangre de Cristo Mountains (Blood of Christ Mountains) and Trinidad, named for the Trinity, are examples. Colorado is the Spanish word for “red.” The name is taken from the red-colored Colorado River. The Spainards heard from Native Americans that there was gold in the mountains, but they did not search for it. As the Spanish claim became weaker, parts of the area were ceded to France. The French heritage can be traced through names remaining on Colorado maps, such as Lafayette, LaSalle, Cache La Poudre and Louviers, mainly in the northern part of the state.

After the United States purchased the Louisiana Territory from the French in 1803, Lt. Zebulon Pike was sent to explore the new piece of real estate for his country. While in the area, Pike tried and failed to climb the mountain named after him. He reported that no one would ever climb that mountain and that there was a good possibility of gold in the area.

In 1858, settlers from the east were drawn to the area in search of gold. In 1859, the El Paso Claims Club was formed to establish law and order in the territory. The club also laid out Colorado City and started selling building sites. Colorado City residents made their living off the miners and small settlements in the mountains, selling provisions and entertainment.

On Aug. 1, 1876, President Ulysses S. Grant signed a proclamation admitting Colorado in the Union as the 38th state.

Colorado Springs is the second-largest city in Colorado and one of the fastest-growing cities in the nation. Founded in 1871, by Gen. William Jackson Palmer, the city was planned to attract people of means and social standing with “good moral character and strict temperance habits.” Since the wide-open town of Colorado City was right next door with its saloons and “working ladies,” the general did not have quite the impact on the Pikes Peak area he would have liked.

The region prospered when gold was discovered in nearby Cripple Creek in 1891. Colorado Springs became a depository and a favorite residence of those with newfound wealth. Following the decline of the Cripple Creek gold fortunes around 1909, the Colorado Springs economy declined. Civic-minded leaders were determined that tourism would be the city’s new gold mine.

Led by Spencer Penrose, who built the beautiful Broadmoor Hotel and graded a road to the top of Pikes Peak, the city rapidly capitalized on its beauty. Colorado Springs quickly became a resort town. As tourism declined due to the Depression and the beginning of World War II, city leaders again looked for a means to save their beautiful city. This time it was decided a military camp was the answer. Congress approved the establishment of a camp in 1942, and almost overnight, Colorado Springs had more Soldiers than residents.

That was the end of the city as a sleepy little tourist town and the beginning of the city that has been referred to as the “military hub of the nation.” Since Camp Carson was built in 1942, Colorado Springs has become home to Peterson Air Force Base, the United States Air Force Academy, the North American Aerospace Defense Command in Cheyenne Mountain, Schriever Air Force Base and the Department of Homeland Security. In return, these commands have attracted the country’s high-tech industries to Colorado Springs. Colorado Springs’ current population is about 456,000.

Before the coming of miners, gamblers, spectators and the like, the area of beautiful rocks, canyons and natural springs at the base of Pikes Peak was sacred to many Native American tribes. They believed the water had supernatural powers.

Settlers believed the springs had a great power, too, and proceeded to develop the area into a successful health spa, including tuberculosis clinics. Manitou Springs, in the late 19th century, was a leading national spa with the tourist trade as its main source of income. Named a historical district in the 1980s, the city’s Victorian architecture and rustic charm continue to attract visitors from across the country.

People always knew there was gold in the mountains. That’s why so many spent so much time looking for it. But it wasn’t until 1890, when a prospector named Bob Womack made the first big strike in Poverty Gulch that the real gold rush was on. Overnight, 12 towns sprang into existence, and Cripple Creek grew from nothing to a population well over 60,000. Everyone wanted gold and was determined to strike it rich.

It’s hard to imagine that mad and crazy scramble now. Cripple Creek and Victor are the only two towns left. As for the mines, the Mollie Kathleen Gold Mine is still open for tours. Cripple Creek residents have decided there’s gold in “them there tourists and gamblers.” Much of the town has been restored and turned into low-stakes gambling casinos.

Both visitors and residents have a lot of fun reflecting on the gold rush days. Victor, the other surviving settlement, is a sleepy, little town near Cripple Creek. On a quiet afternoon, it is easy to imagine dance hall girls and miners, drifters and storekeepers, all after elusive wealth. The Cripple Creek and Victor area is still an active mining district.

Investors from around the world have become interested in the renewed exploration and mining activity. Any day now someone could strike it rich and the rush will be on again. After all, there’s still gold in those mountains.

Founded in 1859 and incorporated in 1903, Fountain is the oldest community in the Pikes Peak area. A supply center and refuge for the early settlers, little remains of the original town. Located east of Fort Carson, Fountain is a popular choice of residence for people assigned to and working at the Mountain Post.

Security-Widefield is between Fountain and Colorado Springs. The small-town atmosphere and close location make this a popular living area.

The city of Pueblo, 40 miles south of Colorado Springs, takes its name from a fortification built there by fur traders in 1840. The fort was called El Pueblo. Today, Pueblo is a highly diversified metropolitan area with nearly 110,000 people. Pueblo offers a variety of cultural events such as performances by the Pueblo Symphony Orchestra and the Broadway Theatre League, along with concerts at the Pueblo Riverwalk and the University of Southern Colorado.

Since the late 1800s, Pueblo has been the home of the Colorado State Fair. The event attracts a half-million visitors each year. An array of the nation’s top entertainers is on hand at each fair. Horse shows, rodeo performances, concerts and numerous exhibits delight both young and old.