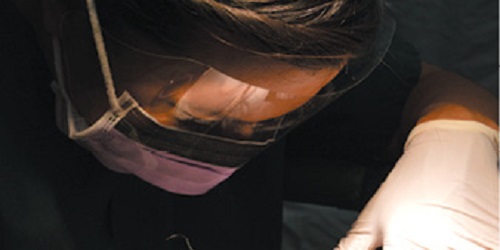 The motto of the 10th Combat Support Hospital (CSH), “In Cruce Vincam,” translates to “I Shall Conquer by the Cross.” This motto is intended to be inspirational in nature and refers to the CSH’s ability to conserve the fighting strength of the Soldier.

The green of the motto’s scroll symbolizes the green fields, the normal operational environment for an Army at war. The maroon and white are the colors of the Army Medical Department. The maroon colored cross represents the medical profession, while the white satire forming the Roman “X” indicates the numerical designation.

The unit was deactivated Nov. 4, 1945, at Camp Myles, Massachussets, following the defeat of the Axis Powers. The 10th Field Hospital resumed its medical support and training mission in Germany, following its reactivation in the regular Army Aug. 25, 1949. The unit was redesignated as the 10th Evacuation Hospital June 15, 1962, and remained in Germany until its deactivation Aug. 16, 1965.

The 10th CSH was reactivated July 12, 1967, at Fort Meade, Maryland. On March 21, 1973, the Evacuation Hospital was reorganized and redesignated as the 10th Combat Support Hospital (CSH). It was redesignated as the 10th Mobile Army Surgical Hospital (MASH) on Aug. 16, 1983. On Aug. 5, 1987, Department of the Army directed a realignment of the 10th MASH with the 4th Infantry Division (Mechanized), Fort Carson, Colorado, with an effective date of Aug. 16, 1988. The 10th MASH was aligned under the 43rd Support Group as a battalion organization with the following subordinate units: 517th Medical Company (Clearing), 571st Medical Detachment (Air Ambulance), 223rd Medical Detachment (Preventive Medicine) and 40th Dental Company.

On Jan. 3, 1991, the 10th MASH deployed to Saudi Arabia with the 44th Medical Brigade, 1st Medical Group in support of Operation Desert Storm until July 1991. The Department of the Army redesignated the 10th MASH as the 10th Combat Support Hospital Dec. 16, 1992. The 10th CSH (FWD) deployed to Bosnia and Hungary in support of Operation Joint Forge from March 12 to Sept. 27, 1999.

On Nov. 17, 1999, the Department of the Army, in accordance with the Medical Reengineering Initiative (MRI), reorganized the 10th CSH into three companies, HHD, Alpha Co (164 bed), and Bravo Co (84 bed), and one detachment, the 223rd Medical Detachment (Preventive Medicine).

In January 2004, the 10th Combat Support Hospital became the first hospital to complete the Medical Re-engineering Initiative conversion. With the conversion, the 10th CSH is now a more mobile 84-bed hospital with an additional 164 beds in storage, if ever needed. The CSH is designed to provide Level III care to deployed Soldiers during wartime operations or humanitarian missions. The hospital facility is the Deployable Medical System, which consists of temper tents and shelters. It is composed of an emergency medical treatment section with a dispensary, one operating room with two tables, two intensive care units each composed of 12 beds, three intermediate care wards each composed of 20 beds, one central materiel services section, laboratory with limited testing capabilities, blood bank, radiology with portable X-ray capability and digital processing and a pharmacy. Due to recent experiences, the 10th CSH has requested an additional OR shelter to increase surgical capabilities. Though the 10th CSH is an Echelon-Above-Division asset, and therefore requires support, with the MRI conversion it is now more self-sufficient than before.

In 2009-2010, the 10th CSH deployed to Operation Iraqi Freedom and once again provided unmatched Level III combat health support with a 98-percent survivability rate, the highest survivability rate in the history of American warfare.

Most recently, the 10th CSH deployed to Afghanistan in support of Operation Enduring Freedom and conducted split base operation between FOB Dwyer and many locations throughout the country. The survivability rate was unmatched by any other unit, and a successful transition was conducted with the incoming unit.

The staff of the hospital is comprised of two personnel components: permanently assigned and professional fillers or PROFIS. With the fiscal 2007 modified table of organization and equipment, the 10th CSH had 482 required positions, which consist of 237 permanently assigned and 245 PROFIS. With the MRI conversion, this represents a shift with the number of permanently assigned personnel decreasing and the number of PROFIS increasing by approximately 40 each. The backbone of a fully operational and functional hospital is the competent staff found under the canvas. An important part of that competent team is the PROFIS staff that makes up more than half of the staff and includes the majority of the clinical professionals. The 10th Combat Support Hospital is the premier combat support hospital within Forces Command and the Department of Defense. The 10th CSH provides comprehensive Level-III medical care and health services to conserve the fighting strength of America’s Soldiers, Sailors, Airmen and Marines.