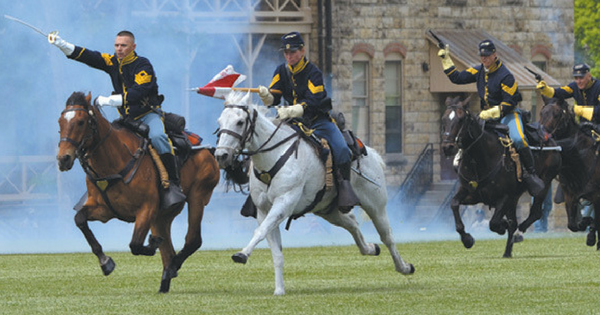 The 9th and 10th cavalry regiments — the famed Buffalo Soldiers — were stationed at Fort Riley several times during their history. Shortly after their formation in 1866, the 9th Cavalry passed through en route to permanent stations in the Southwest. They returned during the early 1880s and the early part of the last century before being permanently assigned as troop cadre for the Cavalry School during the 1920s and 1930s. The 10th Cavalry was stationed there in 1868 and 1913. On the eve of World War II, the 9th and 10th Cavalry became a part of the 2nd Cavalry Division, which was briefly stationed at Fort Riley.

The following two decades have been described as the golden age of the cavalry. Certainly it was in terms of refining the relationship between horse and rider. Army horsemen and the training they received at the Cavalry School made them among the finest mounted Soldiers in the world, and the school’s reputation ranked with the French and Italian cavalry schools. Horse shows, hunts and polo matches — long popular events on Army posts — were a natural outgrowth of cavalry training.

The Cavalry School Hunt was officially organized in 1921 and provided a colorful spectacle on Sunday mornings. These activities gave rise to the perception of a special quality of life at Fort Riley that came to be known as the “Life of Riley.” The technological advances demonstrated on the battlefields of Europe and World War I — most notable the tank and machine gun — raised questions in the inter-war years over the future of Cavalry. By the late 1920s, the War Department directed development of a tank force by the Army. This was followed by activation of the 7th Cavalry Brigade (Mech) at Fort Knox in the fall of 1936 to make up the 2nd Regiment of this brigade.

In October 1938, the 7th Cavalry Brigade (Mech) marched from Fort Knox to Riley and took part in large-scale combined maneuvers of horse and mechanized units. These exercises helped prove the effectiveness of mechanical doctrine.