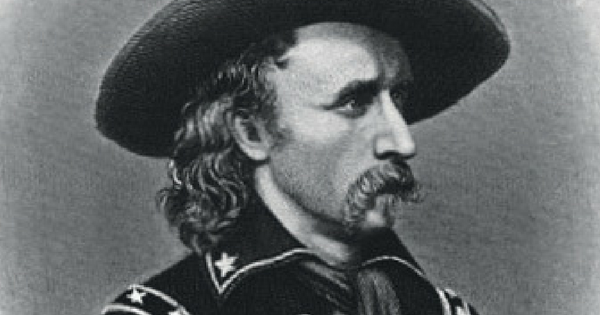 The conclusion of the Civil War in 1865 witnessed Fort Riley again assuming an importance in providing protection to railroad lines being built across Kansas. Evidence of this occurred in the summer and fall of 1866 when the 7th Cavalry Regiment was mustered-in at Riley and the Union Pacific Railroad reached the fort. Brevet Maj. Gen. George A. Custer arrived in December to take charge of the new regiment.

The following spring, Custer and the 7th left Fort Riley to participate in a campaign on the high plains of western Kansas and eastern Colorado. The campaign proved inconclusive but resulted in Custer’s court martial and suspension from the Army for one year, in part for returning to Fort Riley to see his wife without permission.

As the line of settlement extended westward each spring, the fort lost some of its importance. Larger concentrations of troops were stationed at forts Larned and Hays, where they spent the summer months on patrol and wintered in garrison.

Between 1869 and 1871, a school of light artillery was conducted at Fort Riley by the 4th Artillery Battery. Instruction was of a purely practical nature. Regular classes were not conducted, and critiques were delivered during or following the exercise. This short-lived school closed in March 1871 as the War Department imposed economy measures, which included cutting a private’s monthly pay from $12 to $9.

During the next decade, various regiments of the infantry and cavalry were garrisoned at Riley. The spring and summer months usually witnessed a skeletal complement at the fort, while the remainder of the troops were sent to forts Hays, Wallace and Dodge in western Kansas.

With the approach of winter, troops returned to Riley. Regiments serving here during this time included the 5th, 6th and 9th Cavalry and the 16th Infantry Regiment.

The lessening of hostilities with the Native American tribes of the Great Plains resulted in many frontier forts closing. Riley escaped this fate when Lt. Gen. Philip Sheridan recommended in his 1884 annual report to Congress to make the fort “Cavalry Headquarters of the Army.”

Fort Riley was also used by state militia units for encampments and training exercises. The first such maneuver occurred in the fall of 1902, with subsequent ones held in 1903, 1904, 1906 to 1908 and 1911. These exercises gave added importance to the fort as a training facility and provided Reserve units a valuable opportunity for sharpening their tactical skills.