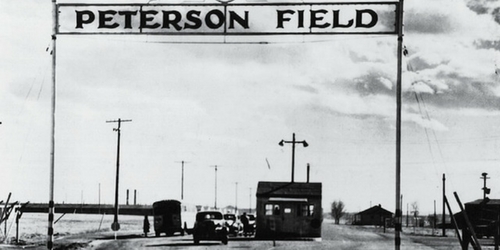 21st Space Wing Heritage: On Guard Throughout the World

The 21st SW has stood guard for freedom and democracy since 1942. During this period of nearly 70 years, the wing has evolved through a series of missions and has served at numerous active-duty locales worldwide. The 21st SW proudly displays the honors of two earlier units that served in World War II, the 21st Bombardment Group and the 21st Fighter Group.

The history of the 21st began in the first half of World War II when the 21st Bombardment Group activated at Bowman Field, Kentucky, in February 1942. From February to June 1942, the 21st Bombardment Group served as an operational training unit while rotating through Columbia Army Air Base, South Carolina, and Jackson Army Air Base and Key Field, Mississippi. The group served longest at MacDill Field, Florida. From June 1942 until inactivation in October 1943, the 21st conducted anti-submarine patrols over the Caribbean Sea.

The 21st finished the last half of World War II in the Pacific Theater. The 21st Fighter Group activated in April 1944 at Wheeler Air Field, Hawaii. Between April 1944 and October 1946, the 21st Fighter Group steadily advanced across the Pacific alongside victorious American forces, never staying more than a few months in any location. In addition to Wheeler Field, the group also served at Mokuleia Field in Hawaii. Then, from February 1945 until inactivation in October 1946, the 21st relocated from Central Field and South Field on Iwo Jima to Isley Field on Saipan, to Northwest Field on Guam.

The 21st Fighter-Bomber Wing, which activated Jan. 1, 1953, is the oldest direct ancestor of the 21st Space Wing. Originating at George Air Force Base, California, the 21st Fighter-Bomber Wing served at Chambley Air Base, France, in the role of air defense from December 1954 until inactivation in February 1958. The wing received its official emblem while stationed overseas on July 23, 1957.

The 21st activated again as the 21st Tactical Fighter Wing on July 1, 1958, this time in the Far East. The wing conducted the mission of air defense at Misawa Air Base, Japan, until inactivation in June 1960.

The 21st served longest at Elmendorf Air Force Base, Alaska; in fact, a total of 25 years spanning 1966 to 1991. The first 13 years, July 1966 to October 1979, were carried by the 21st Composite Wing, called “composite” because of the several aircraft platforms used to conduct the wing’s three missions of air defense, airlift and search and rescue.

Then, on Oct. 1, 1979, the wing was re-designated as the 21st Tactical Fighter Wing and streamlined to once again conduct the mission of air defense. The wing served in this capacity at Elmendorf until inactivation on Dec. 19, 1991.

The wing’s second-longest station of service has been at Peterson AFB, Colorado, since 1992. Activated as the 21st SW on May 15, 1992, the unit transformed its past history of flying to become the world’s largest and most diverse military Space Wing. 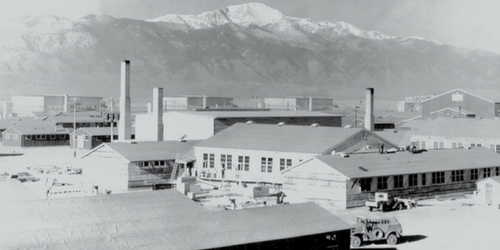 First Lt. Edward J. Peterson was born in 1917 in Berthoud, Colorado. His family moved to Englewood, Colorado, in 1931 and he attended public schools there. He graduated from Denver University in 1940 with a Master of Arts degree in communications. He enlisted in the U.S. Army’s Aviation Cadet program and was ordered to report for basic military flight training in March 1941.

Upon completion of flying training in October 1941, he was commissioned as a second lieutenant in the Army Air Forces. He was promoted to first lieutenant in February 1942 and was assigned as the operations officer of the 14th Photo Reconnaissance Squadron, Colorado Springs Army Air Base, Colorado, in July 1942.

As he was taking off on a flight to Lowry Field in Denver on Aug. 8, 1942, the left engine on his Lockheed F-4 failed and he crashed on the runway.

Upon impact, the plane burst into flames. A base fire truck and crew were nearby, and Peterson was rescued from the wreckage and taken to Glockner Hospital, now known as Penrose Hospital.

With extensive burns on his head, chest and lower body, Peterson died a few hours later, becoming the first Coloradan to lose his life in the line of duty at the newly built base.

The base assumed a new mission in October 1943, training heavy bomber combat crews. The 383rd Bomb Group (Heavy) relocated here from Geiger Field in Washington state to form the nucleus of a heavy bomber training operation, using the Consolidated Aircraft B-24 “Liberator.” Ten-man B-24 crews were formed and received two to three months of combat training prior to assignment as replacement crews for combat units overseas. Peterson Field was also a support base for the 2nd Air Force, based in downtown Colorado Springs. In April 1944, the 383rd Bomb Group was inactivated and the training operation was redesignated the 214th Combat Crew Training School (Heavy). In June 1944, the mission at the base once again changed, this time to fighter pilot training. The 268th Army Air Forces Base Unit used the Curtiss P-40N “Warhawk” fighter to carry out this mission under the 72nd Fighter Wing, which was also headquartered at Peterson Field.

In April 1945, Peterson Field was assigned to Continental Air Forces. Locating the Army Air Forces Instructors School at the base signaled another mission change. Shortly after the end of World War II, on Dec. 31, 1945, the Army inactivated the base, returning the property to the City of Colorado Springs. The legacy of Peterson Field and the military presence in Colorado Springs took a significant turn in September 1947 after the birth of the U.S. Air Force. Soon after its inception, the fledgling service twice reactivated the base, from Sept. 29, 1947, to Jan. 15, 1948, and again from Sept. 22, 1948, into 1949. During the latter period, the base served as an airfield for Headquarters, 15th Air Force, which was temporarily based in Colorado Springs. Peterson Field was inactivated again when 15th Air Force moved to March Air Force Base, California, in 1949.

The Air Force activated Peterson Field once more, following the January 1951 establishment of Air Defense Command at Ent Air Force Base in downtown Colorado Springs. The 4600th Air Base Group activated simultaneously on Jan. 1, 1951, and provided support for the newly established command. In 1958, the 4600th achieved wing status and was designated as the 4600th Air Base Wing. Subsequently, on April 1, 1975, the Air Force re-designated the wing as the 46th Aerospace Defense Wing. One year later, on March 1, 1976, Peterson Field was renamed Peterson AFB.

Strategic Air Command assumed control of the base on Oct. 1, 1979. Then, on Sept. 1, 1982, U.S. Air Force officials activated Air Force Space Command at Peterson, followed by the activation of the 1st Space Wing on Jan. 1, 1983. Peterson AFB became the hub of the Air Force’s space activity when the 1st Space Wing assumed host unit responsibility following the inactivation of the 46th Aerospace Defense Wing on April 1, 1983. The 1st Space Wing then transferred host unit responsibility to the 3rd Space Support Wing, which activated on Oct. 15, 1986. Finally, on May 15, 1992, these two wings inactivated and their personnel, equipment and missions transferred to the newly activated 21st Space Wing.