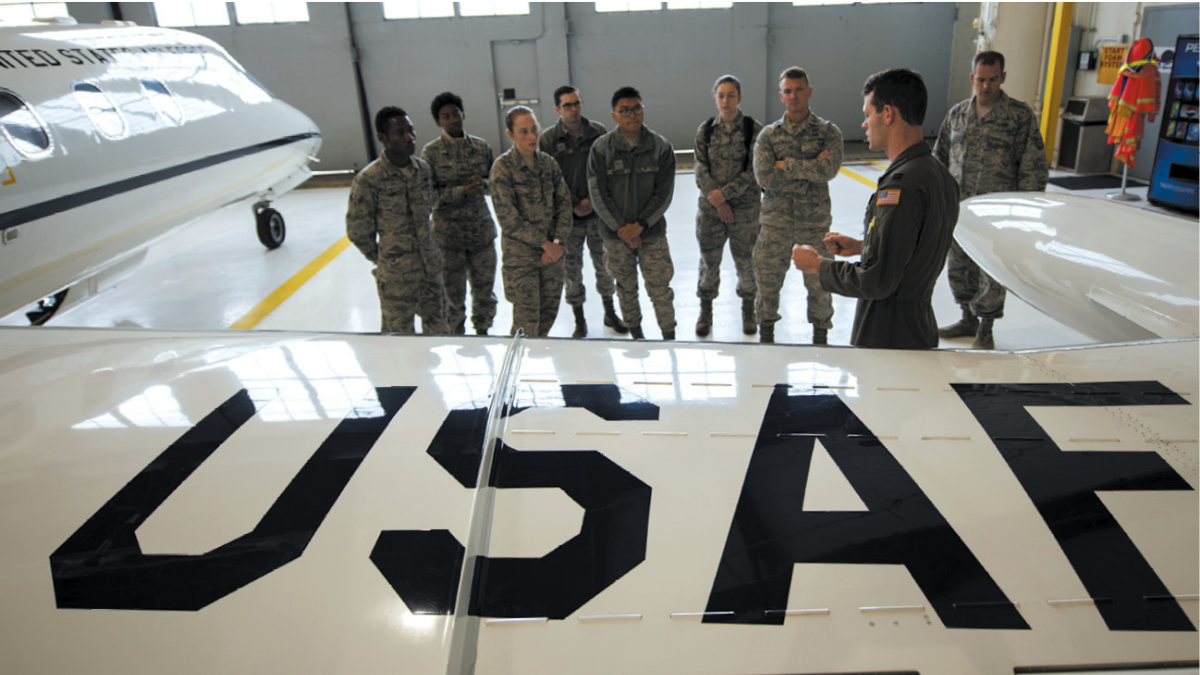 The U.S. Transportation Command is responsible for delivering national objectives in support of the president, the secretary of defense and combatant commander assigned missions.

USTRANSCOM, one of 10 combatant commands, provides full-spectrum mobility solutions to support the joint warfighter in times of peace and war. The command focuses on providing options to the commander in chief in two ways: delivering an immediate force through strategic airlift, tankers and aeromedical evacuation; and delivering a decisive force when needed through strategic sealift and land distribution channels.

At every moment of every day, around the globe, USTRANSCOM’s superb force of Soldiers, Sailors, Airmen, Marines, Coast Guardsmen, Department of Defense civilians and commercial partners works together to accomplish a wide array of joint mobility missions, providing the United States with the most responsive strategic mobility capability in the world.

USTRANSCOM provides synchronized transportation, distribution and sustainment, which allows the United States to project and sustain national military power where needed with the greatest speed and agility, the highest efficiency, and the highest level of trust and accuracy.

Air Mobility Command, a major command headquartered at Scott AFB, was established June 1, 1992. On Oct. 1, 2016, AMC consolidated with Military Air Command, making AMC the oldest major command in the Air Force, tracing its history to the establishment of the Air Corps Ferrying Command on May 29, 1941.

Airlifters provide the capability to deploy our armed forces anywhere in the world within hours and help sustain them in a conflict. AMC also supports presidential and senior leader airlift.

Aerial refueling aircraft are the lifeline of global reach, increasing range, payloads and flexibility. Because Air Force tankers can also refuel Navy, Marine and many allied aircraft, they leverage all service capabilities on land, at sea and in the air. Tankers also have an inherent cargo-carrying capability maximizing AMC’s lift options.

In addition to enabling the force to respond to an enemy attack and sustain operations, rapid global mobility brings humanitarian supplies and assistance to those in need who may live in austere locations.

The command has one Numbered Air Force, the 18th Air Force, which is charged with carrying out AMC’s operational air mobility mission through 11 air mobility, air refueling and airlift wings, one standalone group, and the 618th Air Operations Center (Tanker Airlift Control Center). The Air Operations Center, located at Scott AFB, also reports to 18th Air Force and serves as the organization’s air operations hub, planning and directing tanker and transport aircraft operations around the world.

The 18th Air Force, headquartered at Scott AFB, was first activated March 28, 1951, to execute Tactical Air Command’s troop carrier responsibilities and became operational as the 18th Air Force on June 26, 1951. It was formally inactivated Jan. 1, 1958, and its forces reassigned to the 12th Air Force. More than four decades later, on Oct. 1, 2003, it was reactivated as the operational component of Air Mobility Command.

The 618th AOC (TACC), initially known as TACC, became operational April 1, 1992, when air mobility leadership sought to simplify the execution of the worldwide mobility mission. The highly efficient organization centralized command and control operations previously located within multiple Numbered Air Forces and airlift divisions. TACC was designated as the 618th TACC April 1, 2007, and remained under that designation until being renamed the 618th AOC (TACC) Aug. 30, 2010.

SDDC is the Army service component command to the U.S. Transportation Command and is a major supporting command to the U.S. Army Materiel Command. With nine brigades geographically located throughout the world to support combatant commanders, SDDC is globally postured to provide agility for the joint warfighter.

SDDC is the premier total force surface deployment and distribution synchronizer, a key member of our nation’s joint deployment and distribution enterprise, and is always ready with capabilities available to project and sustain our nation’s combat power, even in the most austere conditions. With a workforce of approximately 2,400 trusted professionals, SDDC delivers readiness to the warfighter.

SDDC books, ships, tracks and conducts port operations for surface movements worldwide by leveraging services from the best of the U.S. transportation industry. SDDC also supports service members, federal employees, and their families with safe and secure delivery of their household goods and privately owned vehicles. The command manages an average of about 500,000 booked household moves a year with about 220,000 of those moves occurring during the peak move season between the months of May and August.

The Defense Information Systems Agency Global Operations Command has been part of the Scott AFB community for more than 20 years. DISA Global is headquartered out of Building 5160 and employs approximately 1,000 service members, civilians and contractors.

In addition to operating and defending the Department of Defense Information Network, DISA Global offers hands-on courses throughout the year to the NetOps community highlighting the processes, procedures, tools and functionalities of DISA Global operations. Interested participants can view upcoming course dates at www.disa.mil/DGOC/Training.

DISA Global is postured to support the constantly evolving networks and services in response to the exponentially increasing cyber threats and requirements of the warfighter and takes great pride in being known as the “Department of Defense Information Network and defensive cyberspace operations technical center of excellence” within the DISA agency and globally throughout the DOD.

Under the strategic guidance of Headquarters AFSPC, the Cyberspace Support Squadron works diligently to achieve its vision of “advancing cyberspace capabilities to deliver decisive global effects.”

The Defense Information Technology Contracting Organization Scott field office is in Building 3600. DITCO-Scott is the largest of four DISA contracting field activities that provides worldwide procurement support to the DOD and other federal agencies.

Along with telecommunications contracting, DITCO-Scott is a full-fledged IT procurement organization. Supporting the DOD’s warfighting mission, DITCO-Scott acquires a wide range of technology to include satellite service, fiber optic transmission, software-controlled telecommunications and information systems. A self-contained, one-stop procurement shop, DITCO-Scott receives all of its funding from a minimal service fee charged to its customers. In return for this fee, DITCO-Scott provides its customers with contracting, legal, financial and information management services. More than 300 DITCO-Scott employees work in “partnership with industry” to get the best information systems equipment or service at the best price. This partnership has enabled DITCO-Scott to provide timely, economical and innovative solutions to meet the needs of the warfighter.

The 932nd Airlift Wing provides first-class, worldwide, safe and reliable airlift for congressional and military leaders and their staffs, flying C-40C aircraft. It maintains these aircraft for VIP special assignment missions. It is responsible for equipping, training and organizing a ready force of citizen airmen to support and maintain all facets of air base operations involving infrastructure and security. It also provides worldwide medical services to the warfighter from the front line to continental United States fixed medical treatment facilities.

The 932nd Airlift Wing is known as the “gateway wing” for being in close proximity to the St. Louis Gateway Arch, but more fitting to the name is the mission of delivering the nation’s executors of global strategy around the world. Full-time support between training assemblies is provided by Air Reserve technicians. These are dual-status technicians — civilian Air Force Ready reservists. Full-time support is also provided by civilian employees who are not members of the Reserve. The technicians are also tasked for training assigned reservists.

In peacetime, the group is assigned to the Air Force Reserve Command. If mobilized, the units provide combat-ready individuals to Air Mobility Command.

The 126th Air Refueling Wing is a nearly 1,000-member, Illinois Air National Guard KC-135R Stratotanker unit capable of providing aerial refueling and airlift support to enhance the U.S. Air Force’s capability to accomplish its global mission. It also provides aerial refueling support to U.S. Navy, U.S. Marine Corps and allied aircraft and supports a wide range of conventional and nuclear plans. The 126th ARW is committed to total joint force efforts as evidenced through its two associate partners: the active associate 906th Air Refueling Squadron, with the 126th ARW serving as the host organization for this total force initiative; and the classic associate 126th Supply Chain Management Squadron, as part of the Air Force Global Logistics Supply Center. During peacetime, the wing receives direction from the adjutant general, the governor of Illinois and the National Guard Bureau.

Upon federal mobilization, the wing is assigned to Air Mobility Command, or specifically, 18th Air Force, to augment active-duty forces during national emergencies or war. The unit’s history can be traced to the 108th Observation Squadron, formed in 1927 in Chicago. The unit flew the O-47 in World War II, B-26s during the Korean conflict and KC-97s during the Vietnam years, becoming the first Air National Guard unit to fly tankers in 1961; the KC-135s arrived in 1976. During the 1990s, the unit served in Desert Shield, Desert Storm and Allied Force. In 2001, the unit was federally mobilized to support operations Noble Eagle and Enduring Freedom after the Sept. 11, 2001, attack. In 2003, the unit was again federally mobilized to support Operation Iraqi Freedom. At various times during its history the unit has been ordered to state active duty, with the most recent state activation in 2009 and 2011 to support the Illinois National Guard’s flood control mission. The 126th ARW has participated in nearly every major contingency of the 20th and 21st centuries and continues to support today’s global war on terror.

The United States Air Force Band of Mid-America is the principal musical ambassador of Headquarters Air Mobility Command. The roots of the Band of Mid-America reach back to 1942 at Jefferson Barracks, Missouri. After several moves, the band relocated to Scott AFB in 1944 as the 528th Army-Air Force Band. Initially it represented the Military Air Transport Service, then the Military Airlift Command and now it proudly represents Air Mobility Command.

The band is often called upon to provide musical support for visiting dignitaries and has had the distinction of performing for Pope John Paul II; Presidents George W. Bush, William J. Clinton, George H.W. Bush and Jimmy Carter; the Queen of the Netherlands; and hundreds of other U.S. and foreign leaders. Whether performing for a head of state, before a capacity crowd, or for troops at home or abroad, the Band of Mid-America reflects the heritage and pride of our great nation and the United States Air Force.

Today’s Band of Mid-America is comprised of 60 active-duty Airmen. All 60 musicians may perform together for special concerts, parades and other events, or they may be divided into several smaller autonomous performing groups to satisfy local, major command and regional needs. For added flexibility, the Band of Mid-America can use various vocal ensembles, protocol combos and individual musicians. For more information about ensembles and booking performances, please visit their website at www.music.af.mil/Bands/US-Air-Force-Band-of-Mid-America.

The 15th OWS produces more than 9,000 weather warning and advisories, 18,000 terminal aerodrome forecasts, 12,000 graphical aviation hazard products and 30,000 flight weather briefings per year. In addition to its operational mission, the 15th OWS serves as the training center for 20 percent of all new Air Force-enlisted forecasters and weather officers. After completing an eight-month initial skills course, new weather apprentices report to the 15th OWS to complete a 15-month upgrade training process. The squadron’s manning consists of active-duty, Reserve and civilian personnel and constitutes one-sixth of the 1st Weather Group located at Offutt AFB, Nebraska.

The 345th RCS belongs to the Air Force Recruiting Service headquartered at Randolph AFB, Texas. AFRS is responsible for accessing 100 percent of the enlisted force into one of more than 152 enlisted career specialties, 100 percent of Air Force chaplains, 90 percent of the service’s health professions officers (physicians, dentists, nurses, health care administrators and biomedical science corps members) and about 16 percent of Air Force line officers each year. Please contact the 345th RCS for more information about joining the U.S. Air Force.

The Area Defense Counsel, an associate unit of the Air Force Legal Operations Agency, provides legal advice and representation to military members in Uniform Code of Military Justice proceedings and adverse administrative actions. Such actions range from involuntary separations and demotions to Article 15 nonjudicial punishments and courts-martial. In addition, the ADC provides advice to members of the potential consequences of off-base misconduct and assistance to those who are interrogated as suspects. The ADC is in Building P-7.