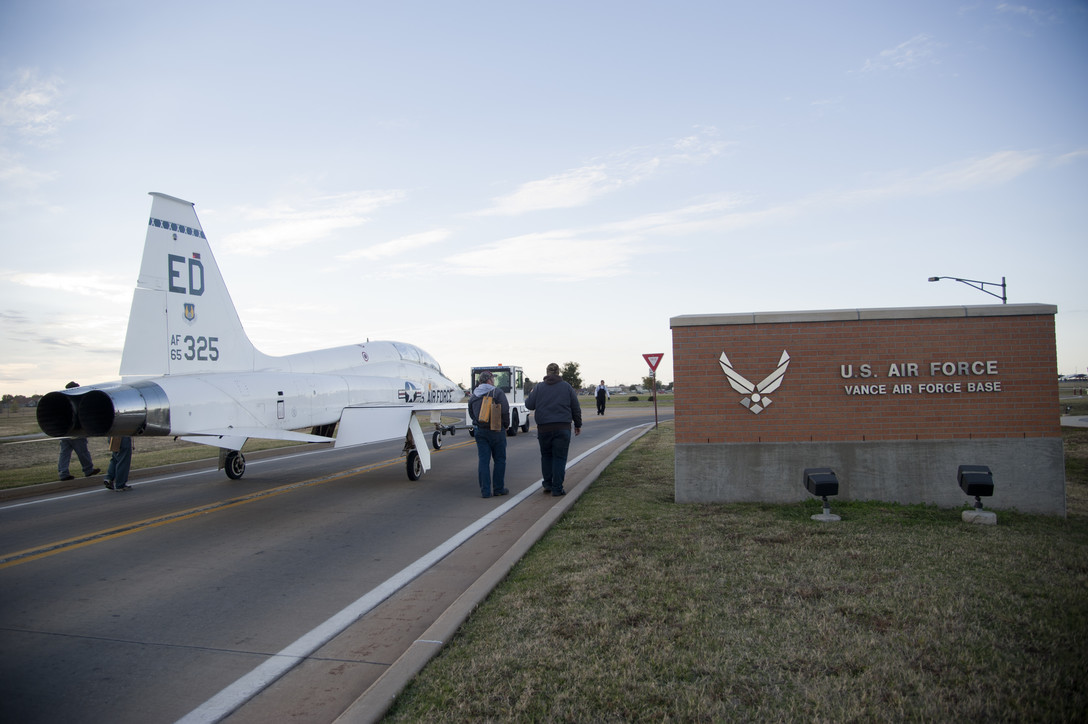 Vance Air Force Base, Oklahoma is located in Garfield County, on the south side of the City of Enid. Enid is approximately 95 miles northwest of Oklahoma City, 115 miles west of Tulsa, and 123 miles south of Wichita, Kansas. This is a military town and the community appreciates our presence.

Specialized Undergraduate Pilot Training (SUPT) is divided into three phases that cover 52 weeks. Phase I (preflight) is 24 days long and is split into two units: five hours of ground training, including emergency procedures, aircraft operating limitations, checklist usage and local radio procedures; and 220.9 hours of academic training including aerospace physiology/human factors, T-6 systems, flying fundamentals and introduction to aerodynamics. As part of the primary training syllabus developed at Vance, water survival training was added to Phase I in April 1998.

Vance Air Force Base is named for Lt. Col. Leon R. Vance, a local World War II hero and Medal of Honor recipient. Originally a flight school that trained more than 9,000 pilots for the Army Air Corps between 1941 and 1945, the base was activated Jan. 13, 1948, within the Air Training Command of the newly formed Air Force.

Vance was the first base in AETC to have extensive civilian contractor support for base functions ranging from aircraft maintenance to fire department to child care services. The support contract began in 1960 with Serv-Air. Northrop Worldwide Aircraft Services assumed the contract in 1972 and then on Feb. 1, 2001, the support contract transferred to DynCorp Technical Services. DynCorp's contract was assumed by Computer Sciences Corporation in 2005. Computer Sciences Corporation’s contract was assumed by Pacific Architects and Engineers in 2013 and they presently perform in that capacity.

Enid Oklahoma's population is 52,787, making it the 9th largest city in Oklahoma.

The 71st Medical Group (MDG) supports the 71st Flying Training Wing in execution of the global reach mission by providing, expanding, and deploying medical capability for contingency taskings. The 71 MDG trains many healthcare professionals annually through our training programs and sustains the readiness skills for more than 115 active duty personnel. Additionally, the 71 MDG provides health services for more than 4,300 beneficiaries. The Group is accredited by The Joint Commission, American Dental Association, and College of American Pathologists and has affiliations with the American Hospital Association, and American Medical Association.

The group is comprised of two squadrons: