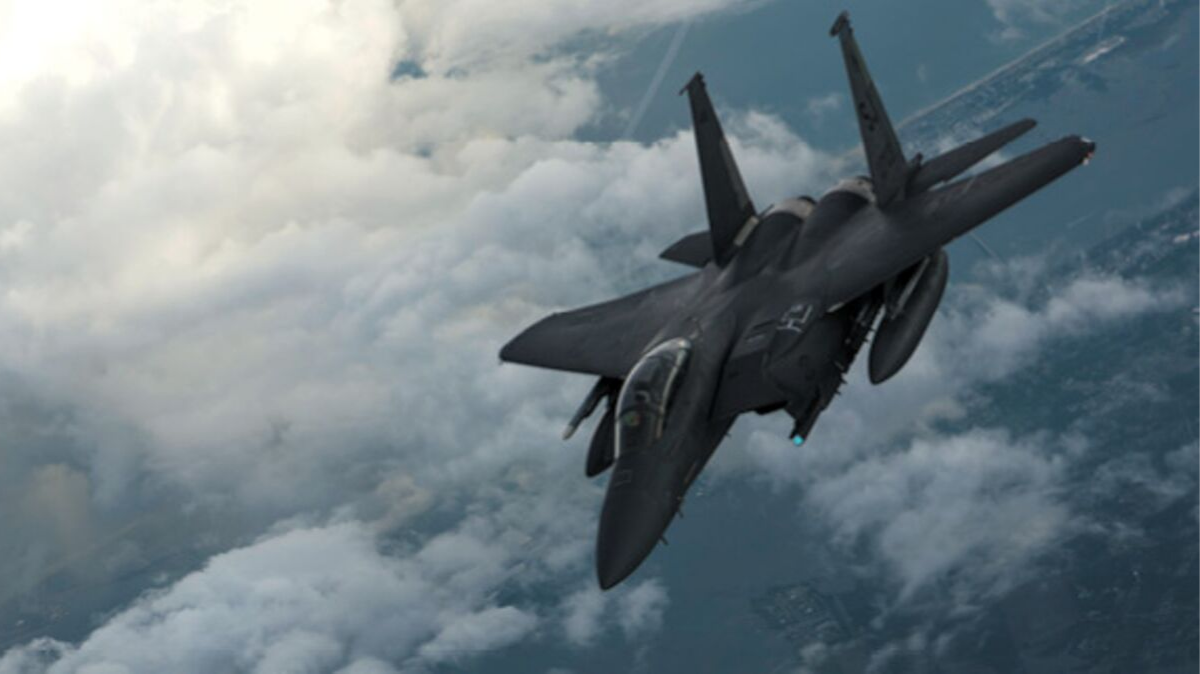 Spanning more than five decades and five wars, the 4th Fighter Wing is one of the most distinguished fighter units in the world. In addition, it has the distinction of being one of only two Air Force units that can trace its history to another country.

Before the United States’ entry into World War II, American volunteers were already serving as combat veterans in Royal Air Force Eagle Squadrons (71st, 121st and 133rd). When the United States entered the war, these units, and the American pilots in them, were transferred to the U.S. Army Air Forces, 8th Air Force, forming the 4th Fighter Group Sept. 12, 1942.

The 4th Fighter Group (with squadrons now designated the 334th, 335th and 336th) was a record setter throughout the air war over Europe, justly earning the motto “Fourth But First.”

The 4th Fighter Group was inactivated at Camp Kilmer, New Jersey, Nov. 10, 1945. The unit was reactivated at Selfridge Field,
Michigan, Sept. 9, 1946, as the United States began to rearm due to Cold War pressures.

Following a period of training with F-80 Shooting Star aircraft, the 4th Fighter Group transitioned to F-86 Sabre jets in March 1949, just in time for advanced training and entry into the Korean War.

Now associated with the 4th Fighter-Interceptor Wing, the group moved to Japan following the Korean armistice in 1953, continuing training and tours to Korea. The unit moved to Seymour Johnson Air Force Base, North Carolina, Dec. 8, 1957, picking up a fourth tactical fighter squadron (the 333rd “Lancers” remained with the 4th Wing until reassignment to Pacific Air Forces Dec. 4, 1965) and was redesignated as the 4th Tactical Fighter Wing in July 1958.

Significant events of the 1960s include the deployment of the three tactical fighter squadrons to McCoy AFB, Florida, during the Cuban missile crisis in October 1962; rotational tours to Southeast Asia in 1965; and transition to F-4D Phantom II aircraft beginning in early 1967. The readiness posture of the wing was given a true test in early 1968 when the North Koreans seized the Pueblo, an American intelligence-gathering ship, just off the coast of North Korea. Elements of the Fourth moved to Korea within 72 hours.

The 4th Fighter Wing continued to sustain a highly visible mobility posture with development of the first operationally ready bare-base squadron in 1970, followed by multiple deployments to Southeast Asia beginning in April 1972. Operating from Ubon Royal Thai Air Base, Thailand, as the first F-4 wing to augment elements of Pacific Air Forces, aircrews of the Fourth flew more than 8,000 combat missions, many into the very heart of North Vietnam.

Following on the heels of Constant Guard operations in Southeast Asia, the Fourth executed Peace Echo operations in October 1973, an almost instantaneous response to critical events in the Middle East, which helped restore a balance of power in that troubled part of the world.

In 1974, the wing mission reverted back to training, with increased emphasis on short-term European contingency support. Elements of the wing deployed to Norway in June 1974. Two short-term deployments to Spangdahlem AB, Germany, were conducted in July and September 1975. The highlight of 1976 came in November when the wing took first place in the William Tell worldwide weapons competition at Tyndall AFB, Florida, becoming the first F-4 unit to win the Air Defense Command-sponsored event. The wing executed short-term deployments to Korea and Japan during 1977 and assumed a dual-based mission (with Ramstein AB, Germany) in October of that year. The overall mission commitment was restructured to reflect worldwide contingency emphasis in October 1986.

Beginning in late 1980, the wing began converting to ARN-101-equipped aircraft to enhance bombing and navigation capabilities. In September 1981 and in October 1983, the wing won the prestigious Gunsmoke meet in the F-4 ARN-101 category. The meet was held at Nellis AFB, Nevada, where in January 1985 the “Fourth But First” became the first operational unit to conduct live drops of the GBU-15 guided bomb unit.

With assignment of a fourth tactical fighter squadron (the 337th “Falcons”) on April 1, 1982, the Fourth was recognized as one of the Air Force’s largest operational tactical fighter units. The 337th was inactivated July 1, 1985.

At the height of conversion training, the Fourth was one of the first units tasked to react to Iraq’s invasion of Kuwait Aug. 2, 1990. Two F-15E tactical fighter squadrons were deployed to Southwest Asia in August and December of that year. The unit earned another first by spearheading nighttime strikes against Iraqi forces Jan. 16, 1991, helping to bring the
Persian Gulf War to a successful conclusion Feb. 28.

On April 22, 1991, the Fourth became the Air Force’s first composite wing. The 4th Tactical Fighter Wing was redesignated the 4th Wing and incorporated under it all the people, KC-10 aircraft and assets of the 68th Air Refueling Wing, a Strategic Air Command unit.

The Fourth began a force structure change in 1994. The KC-10s were reassigned to Air Mobility Command bases in 1994 and 1995 and the F-15E formal training unit moved to Seymour Johnson in 1994 and 1995. The 333rd Fighter Squadron returned to Seymour Johnson to accommodate the training mission. Following the departure of KC-10s, the 4th Wing was redesignated the 4th Fighter Wing Dec. 1, 1995. To accommodate the need to train more F-15E aircrews, the 334th Fighter Squadron became a training squadron Jan. 1, 1996.

Fewer resources and the need to use all Air Force assets to meet increased operational commitments called for yet another reorganization as the 20th century came to a close. The expeditionary aerospace force concept represents the Air Force vision to organize, train, equip, deploy and sustain itself in the 21st century global security environment. Under the concept, the Fourth is one of two on-call rapid response aerospace expeditionary wings. The Fourth was the first to assume the on-call mission Oct. 1, 1999.

On June 20, 2000, the 23rd Fighter Group became a part of the 4th Fighter Wing, during a reassignment ceremony at Pope Air Force Base, North Carolina, and continues to operate from Fayetteville, North Carolina The group flies and maintains A-10A Thunderbolt II aircraft. Its primary mission is forward air control, close-air support, interdiction and combat search and rescue operations. The ceremony brought together two organizations whose histories predate the United States involvement in WWII, when both units served as American volunteer groups.

In January 2001, the 4th Fighter Wing became the proud recipient of the Commander-In-Chief’s Installation Excellence Award — receiving a $1 million prize for quality of life and job enhancement. The honor proves the hard work and dedication of all members of the Fourth as the “best base in the Air Force.”

In October 2001, in response to the Sept. 11 terrorist attacks on the United States, the 4th Fighter Wing began flying Operation
Noble Eagle sorties, the first of its kind for the wing, providing coastal protection for Homeland Defense.

In January 2002, the 4th Fighter Wing arrived in Kuwait in support of Operations Southern Watch and Enduring Freedom, flying missions over Iraq and Afghanistan. On March 1, 2002, Operation Anaconda was launched, and the wing’s mission was to provide close air support into Afghanistan. Operation Anaconda ended March 21, 2002, with the 4th Fighter Wing’s greatest highlight being its performance at Roberts Ridge. Members of the 335th Fighter Squadron successfully suppressed enemy fire from al-Qaida troops, as Army and Air Force personnel retrieved stranded and fallen comrades.

In March 2002, A-10s assigned to the 23rd Fighter Group from Pope AFB, North Carolina, arrived in Jacobabad, Pakistan, and later became the first fixed winged aircraft to enter Afghanistan to fight the war on terrorism.

On Sept. 1, 2002, the Fourth transitioned into its final on-call AEW. Though the 4th Fighter Wing will continue as a lead wing when deployed, it will now assimilate into the more predictable 90-day 10 AEF schedule, as opposed to waiting for the call from higher headquarter.

In January and February 2003, in response to the threat of Iraq’s ability to produce weapons of mass destruction and their elusiveness with United Nation weapon inspectors, the 4th Fighter Wing joined other operational units in Southeast Asia. Two F-15E fighter squadrons deployed to Southwest Asia in support of OSW, which would later transition into support for Operation Iraqi Freedom. On April 18, 2003, members of the 4th Fighter Wing returned heroically to Seymour Johnson AFB after contributing to the resounding U.S.-led collation victory over Iraq.

During 2004, the 4 FW transitioned into the normal AEF deployment rotation cycle. During August and September 2004, the
4 FW deployed more than 1,300 wing personnel from various units across the base in support of Air Expeditionary Force 1/2. Team Seymour members were deployed to several locations around the world, primarily to Southwest Asia in support of Operation IRAQI FREEDOM and Operation ENDURING FREEDOM.

On Oct. 2, 2009, Capt. Mike “Ox” Polidor and Capt. Aaron “Finch” Dove, of the 335th Fighter Squadron “Chiefs,” were in the right place at the right time to save the lives of American and coalition service members. Command Outpost Keating was in danger of being overrun by overwhelming Taliban forces. After expending their munitions, Polidor and Dove directed air support for the outpost. More than 80 coalition troops’ lives were saved by their actions and they were each awarded the Distinguished Flying Cross.

The heroes of the 4th Fighter Wing are not just pilots or weapons systems officers. On May 18, 2010, Master Sgt. Van Hood, from the 4th Civil Engineer Squadron Explosive Ordnance Disposal flight, was awarded the Bronze Star Medal for his actions while deployed to Forward Operating Base Airborne in the Wardak province of Afghanistan. The greatest risk to American lives in Afghanistan are improvised explosive devices. Hood’s main task was to locate and destroy these lethal weapons, a job that saves lives, but is inherently dangerous. Joining the Air Force in 1996, Hood had deployed seven times. This was his third Bronze Star.

On June 2, 2011, The Air Force Historical Foundation awarded the first-ever General James H. “Jimmy” Doolittle Award to the 4th Fighter Wing. The award was given in recognition of its sustained, significant contribution to Air Force history. The citation on the award read, “For gallantry, determination, esprit de corps, and superior management of joint operations in accomplishing its mission under difficult and hazardous conditions in multiple conflicts.” The men and women of the “Fourth But First” were honored to have their contributions to Air Force history acknowledged.

On June 14, 2012, the 4th Fighter Wing achieved another first when Col. Jeannie Leavitt took command of the wing and became the first female to command an active duty Air Force fighter wing. Leavitt is a command pilot with more than 3,000 hours, including over 300 combat hours. Her operational experiences include Operations SOUTHERN WATCH, NORTHERN WATCH, IRAQI FREEDOM and ENDURING FREEDOM. She served as the 4th Fighter Wing commander for two years.

Today, our Airmen support contingency operations all over the world. Strike Eagle firepower is available wherever and whenever it is needed. From the Eagle Squadron Spitfires through the mighty F-15Es of today, the 4th Fighter Wing has been the tip of the spear confronting America’s enemies. The heart of the volunteer resides in today’s Airmen of the 4th Fighter Wing. Escorting B-17s to Berlin or supporting our fellow service members in Southwest Asia, the “Fourth But First” has always led the way in the defense of our great nation.