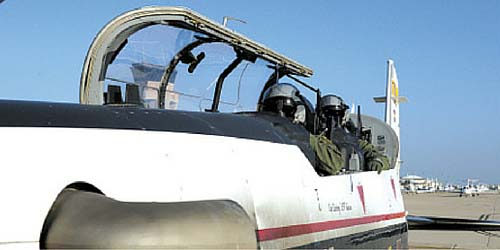 Originating as “Laughlin Army Air Field” in March 1943, Laughlin Air Force Base honors Jack T. Laughlin, a B-17E pilot whose Flying Fortress was shot down and lost at sea off Borneo in January 1942 during a bombing run against Japanese warships and transports. Laughlin was the first World War II casualty from Del Rio; it had been his first mission.

The facility, renamed “Laughlin Field” in November 1943, later became an Army Air Force auxiliary field. During World War II, its primary mission was to train B-26 bomber pilots and aircrews, but the war’s end in September 1945 ended its purpose and it shut down the next month.

Its subsequent use by local ranchers to graze sheep lasted just seven years. As tensions built between the Soviet Union and the West, and North Korea invaded South Korea, the military reopened Laughlin Air Force Base on May 1, 1952. In October, the Air Training Command transferred the base to the Crew Training Air Force and activated the 3645th Flying Training Wing (Fighter) to teach bombing and gunnery skills to replacement air combat pilots and crews headed for the Korean War. Initially, planes used were the F-80 Shooting Star, the Air Force’s first operational jet fighter; the F-84 Thunderjet fighter bomber, the war’s primary strike aircraft; and the T-33 jet fighter, but within a short time crews used only the T-33 because its two-cockpit configuration made it more suitable for training.

The Air Force transferred jurisdiction of the base to the Strategic Air Command in April 1957, and the 4080th Strategic Reconnaissance Wing (Light) moved there from Turner Air Force Base, Georgia. After graduating its last class in March 1957, the Air Training Command inactivated the 3645th Flying Training Wing.

The 4080th Wing provided high-altitude reconnaissance and air sampling for radiation with the highly classified Lockheed U-2A, the “Dragon Lady,” and the RB-57D Canberra, though existence of the U-2 and the CIA’s monitoring program burst into public awareness when the Soviet Union shot down a U-2 on May 1, 1960, and captured and imprisoned its pilot, Francis Gary Powers.

On June 15, 1960, the 4080th Strategic Reconnaissance Wing was redesignated the 4080th Strategic Wing and its RB-57 mission was phased out, though the U-2s remained, and U-2s from Laughlin were among the first to photograph Soviet missile installations in Cuba in 1962, triggering the Cuban missile crisis and a U.S. Navy blockade of the island. Photos from 4080th’s Maj. Richard S. Heyser’s U-2 and that of Maj. Rudolf Anderson Jr. showed the world the Soviet military buildup just 90 miles from the Florida coast; President John F. Kennedy addressed the nation on the danger, the United Nations got involved and the Soviets removed their missiles, though not before one was launched at Anderson’s U-2 and killed him. He was the sole known fatality from enemy action during the crisis.

In 1961, the Air Force expanded Laughlin’s mission to include an Air Training Command undergraduate pilot training program. Plans called to transfer in about half the students from Laredo Air Force Base, Texas, and Air Training Command reactivated the 3645th Pilot Training Wing (later redesignated the 3646th Pilot Training Wing) at Laughlin in October 1961 to prepare for the students and their T-37 Tweet and T-33 Shooting Star trainers. The 4080th Strategic Wing continued at Laughlin as a tenant organization until 1963.

Laughlin’s mission has remained the same since 1962: training top-quality military pilots and pinning silver wings on almost 24,000 of them since the first class in 1955, thus contributing significantly to the nation’s aeronautical progress and national security.

Today, aircraft flown at Laughlin include the T-6A Texan II, a single-engine turboprop; the T-38C Talon, the first supersonic trainer; and the T-1A Jayhawk, a twin-engine jet for advanced pilot training. Fifteen classes of 20 to 25 pilots graduate annually.